The first time I left the starting town in the indie role-playing game Outward, I found what looked like to be a giant chicken. The thing followed me as I attempted my first quest: finding mushrooms in a troglodyte cave. It was persistent. It was pesky.

Outward is what happens when you take open-world RPGs and throw in elements of survival games like Ark: Survival Evolved. It takes away the niceties of the blinking dot on the map to show you where you are. Want labels? You won’t find them on the map, either. And encumbrance matters — and you’ll find yourself struggling with your urges to be a walking Costco and pick up everything as prepare for your first trip into the wild.

It’s fascinating and frustrating. And Guillaume Boucher-Vidal wouldn’t have it any other way.

The creative lead and CEO and founder of Nine Dots Studio did an interview with me about Outward, which released today on Steam, PlayStation 4, and Xbox One. It’s the game company’s third indie, following its debut with Brand in 2012 and GoD Factory: Wingman in 2014 (Bandai-Namco published it). We talked about Nine Dots’ approach to Outward and how even its world map reflects its approach to leaving solutions in the hands of players. 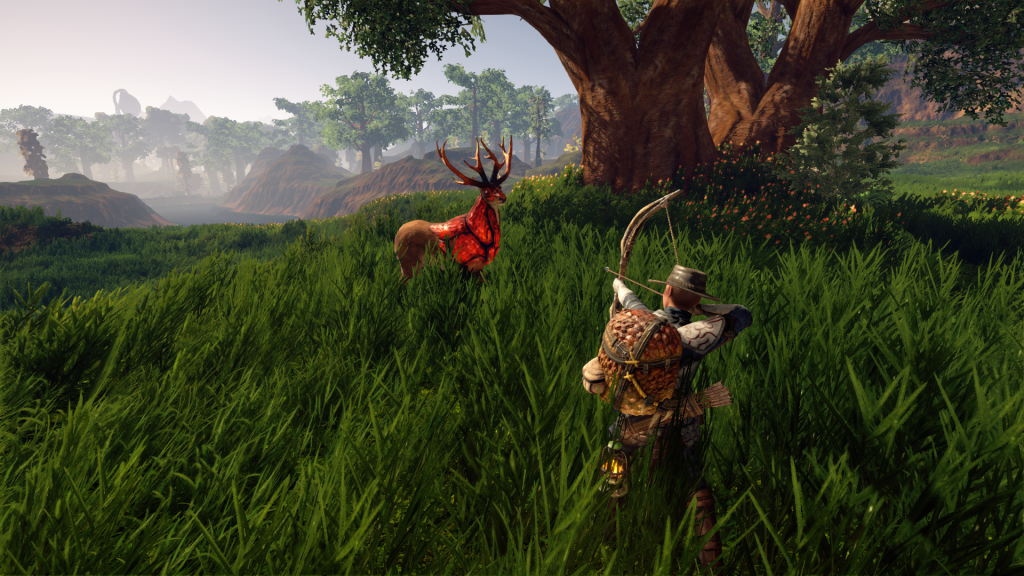 Above: Hunting is a key component to Outward.

GamesBeat: This RPG feels like Ark: Survival Evolved. But then you die the first time. You get back to your town. Then it starts to look like an RPG. Are you worried about people getting confused about this?

Guillaume Boucher-Vidal: To be honest, we did have some issues with people’s expectations being all over the place. People who have experience with a game like Skyrim or Fable or Witcher, they expect just that because they’re familiar with that experience. Then you have this other category of gamers who play Ark and Rust, and because that’s their basis, that’s what they see in Outward. We’re trying to be consistent in saying that Outward is an RPG with survival elements and not a survival game with RPG elements.

GamesBeat: That seems really clear in the first town. That’s your base, right?

GamesBeat: Is that the only town?

Boucher-Vidal: There are four towns. We have four different regions, and they all have different biomes. They all have their own city to visit. I think that’s one of the things that will get the point across: that it’s an RPG, the fact that there are merchants and NPCs and quests. People can interact with that and make the world feel more alive. It’s not just a survival experience where you would expect to build your own base or something like that.

GamesBeat: When I was running through town, I already found a couple of quests. Just going and getting some mushrooms, but the sense I get from this game already is that a simple quest to get some mushrooms isn’t so simple.

Boucher-Vidal: That would be a correct assumption, yeah.

GamesBeat: This is hard.

Boucher-Vidal: Well, the one thing that I think will be difficult for some, and very enjoyable for others, is that Outward requires the player to unlearn. That will be the biggest challenge. We’ve played so many games where we’re always being spoonfed the content. We get our handhelds. We’re thrown around in situations always in a moment where we can easily handle that situation. We were thinking, in a game like Outward, we want to make it more simulation-ist, a bit, an experience. We wanted to put ourselves in the shoes of someone who would be doing something dangerous. What is the thing you need to do if you’re in danger? You have to be careful. You shouldn’t be seeing two bandits and thinking, I’ll just jump in there and kill them. You just got out of the village. You have no experience. Two bandits that are better equipped than you, more dangerous than you — they can obviously survive out there and you can’t. Why would you run into this without getting prepared?

This idea of teaching the player, no, you can’t just jump at it, and if something works, all right, do that. If it doesn’t, don’t get in there and expect things to work out your way eventually. We know that some players will hit a wall, and we kind of — we’re OK with that. We’re unapologetic about it. It’s not meant to be a game for absolutely everyone. It’s meant to be a game for people who are looking specifically for that extra challenge.

GamsBeat: My first wall was carrying stuff. I enjoy RPGs that have encumbrance. I started as a D&D player, and in my campaigns, I used the encumbrance rules. In Outward, it seems very punishing. Even with the first bag I found, lying around in my house, I was so overweight. All I had was a set of padded armor, a hatchet, a pick, and food. I’m still pretty early on, but are you going to be able to carry more?

Boucher-Vidal: The first backpack you find, the satchel, is really just a starting point. But the same way that you can increase your armor and your weapons, you can find an improved version of a backpack and eventually have more inventory capacity.

GamesBeat: Can you make yourself stronger to carry more?

Boucher-Vidal: There are some armors that give you extra capacity as well. For instance, the trader, the caravaneer at the entrance of town, sells some trader armor. That increases the inventory capacity, because it has pockets and everything. That’s one way to go at it. The general trader, even in the first village, sells a backpack that’s not just–the satchel itself is just a piece of fur that’s tied together. An actual backpack from the store will already almost double your inventory space.

GamesBeat: Why make the inventory so limiting?

Boucher-Vidal: I know quite a few games that are actually more limiting than Outward would be. I’m thinking of State of Decay, for instance, or even DayZ. But the core of the idea was, every single thing we could think of in the usual RPG experience that would remind me that it’s a game, we evaluated whether or not we wanted to change it. With inventory, the core example was, I’m running around in Skyrim. I don’t have anything with me suggesting that I have a lot of inventory space. I see five sets of full plate armor in a stall, and I just pick it all up and then it doesn’t change anything. It’s almost limitless. That just reminds you that it’s just a game. For some it’s quite okay, but to me, the core of my experience when I play large scale, especially open world games, I want to feel immersed in that world. I want that world to feel real to me. We tried to go with as realistic as we could in terms of inventory capacity. 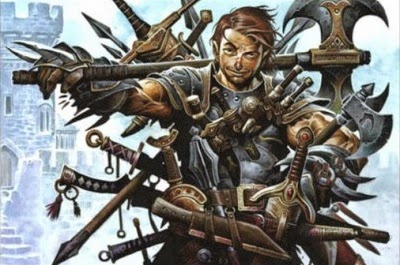 Above: Meet Costco, the walking warehouse of weapons.

GamesBeat: Like in this image, that’s what you’re trying to avoid?

GamesBeat: A warrior walking around with a weapon shop on his back.

Boucher-Vidal: Exactly, yeah. I love it. That’s a great picture.