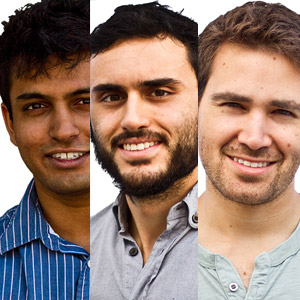 A small Detroit-based company has plans to reinvent the way restaurants, cafes and stores take money from customers.

Own is aiming to make a point-of-sale (POS) system that doesn’t just overhaul the cash register, it turns it into a node on a web-connected information system. Its solution combines the slickness of tablet hardware, the optimization of a custom operating system, and the flexibility of a cloud-based infrastructure to make it all happen.

That is, if it works. The company has been testing its system with about 20 beta customers in the Detroit area. It just secured an $850,000 investment round led by Detroit Venture Partners, and plans to move the engineering team to Silicon Valley by mid-October. Own was founded by Verdi Ergün and Erol Ahmed.

“We’re not an app, nor a POS. We’re a cloud-and-social-based platform for retail 2.0, plus POS,” says Rajeev Viswanathan, the company’s energetic 20-year-old chief executive.

The company’s plans are more ambitious than most startups — it’s not just making an app, it’s building a whole system. That system starts with tablets (sourced from Asus) running a custom, Linux-based operating system called Nimbus, which Own has developed. The tablets act as touchscreen point-of-sale devices in retail locations. From there, the tablets transmit data over the Internet to Own’s servers. Business owners can get real-time data about retail sales through a web-based interface called Up. The analytics can also show trends over time, by location, or even correlated with the weather, Viswanathan says. The analytics apply to all of a company’s Own-enabled points of sale, across an entire restaurant chain, for example. 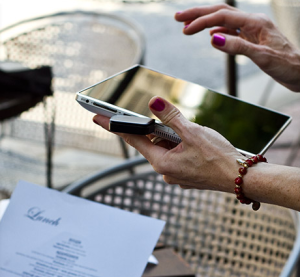 Also, business owners can use Up to set prices, distribute coupons, change their menus, initiate sales, and the like. What’s more, Viswanathan says, the system will be able to integrate with Twitter and Facebook. Right now it lets business owners send updates to their network, but the company plans to integrate it more tightly with social networks so that, for instance, it can deliver targeted discounts to specific customers.

In an age when many startups are focused on making a better iPhone photography app or yet another daily deals site, Own’s ambition is impressive. It also means there are a lot of pieces to coordinate, which will be a challenge for the young startup.

The server software is built on Ruby on Rails, which Viswanathan says will facilitate integrating Up with other commerce systems, such as daily deals sites, social shopping services and more.

“Since it’s web based, we can integrate in a flash with all these components that people have built web apps for,” Viswanathan says.

“It’ll become a platform for web services that want to integrate into the point of sale. It’s the connectivity between daily deals, mobile payments, or social media and the small business owner,” says Jake Cohen, vice president of Detroit Venture Partners.

The company has about 20 employees, Viswanathan says, and has been working for over two years on the project. Much of the development has been driven by feedback and requests from beta testers.

“These store owners are helping us. They’re telling us what they want. We’re not just making this up,” he says.

The company competes with POS vendors like Micros, Radiant and Coffee Shop Manager. But when I ask him if it competes with Square, Viswanathan bristles. “We’re not an app,” he reiterates. Whereas Square focuses on credit-card processing and “making anyone a merchant,” Own will target shop owners: people who are already retailers.

The company is in the process of moving its technology team to Silicon Valley, to better attract engineering talent and to be closer to potential integration partners. However, it plans to open a sales, marketing and customer support center in Detroit.

“These guys are from the Midwest. At the end of the day, these guys think they can differentiate through customer service,” Cohen says. “It’s about understanding the customer, and their customers are nationwide. We feel like we can relate to people across the country. Silicon Valley is a great place for technology, but maybe not as great of a place for sales and customer service,” says Cohen.

Viswanathan credits a series of mentors for helping guide him. Amit Gupta, Ambassador G. Wallace Hope, Babu Lal Jain, and his former employer, Alex Antonov at Siber Systems. And, while he isn’t getting much sleep, it’s clear he’s fired up about the move.

Other Own investors include Vinyard Capital, Compuware Ventures, Ludlow Ventures and Bluewater Angels. The company previously raised $250,000 in a seed round from investors including Tolga Ciftci, Nathan Stoll (founder of Aardvark.com), David Fry (founder of Fry.com), Murat Ahmed, and Bob Stefanski (co-founder of TIBCO).

Note: VentureBeat first mentioned Own in an unsubstantiated story yesterday, which we’ve since pulled. We regret the error.