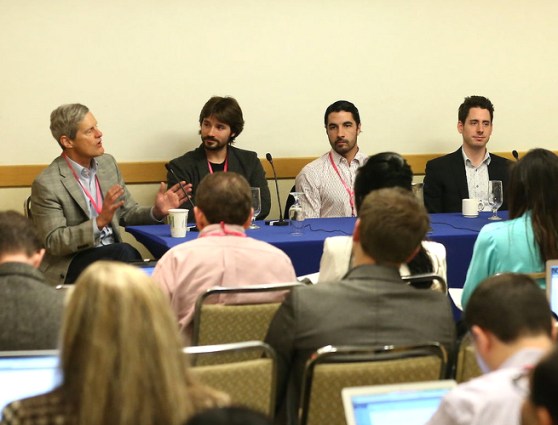 Platform-as-a-service (PaaS) is by far the smallest sector of cloud among the main areas of IaaS, PaaS, SaaS, and BPaaS. But the CEOs of four young platform-as-a-service startups think their prospects for growth and survival are good — as long as the enterprise bites.

Today at CloudBeat 2012, the four CEOs — AppFog‘s Lucas Carlson, Apprenda‘s Sinclair Schuller, dotCloud‘s Solomon Hykes, Engine Yard‘s John Dillon — all believe that 10 years from now the PaaS and cloud markets will be substantially changed, with PaaS kicking serious ass. What that takes is big-dollar companies to invest in PaaS companies on the promise that it will help them deploy and develop apps faster and better than they’ve ever done.

“When you go into an enterprise and talk to them, you say ‘we’re here to build the foundation for the next 10 years of app development for you,’ Schuller said.

Apprenda stands out among the rest of the crowd because it offers its product to enterprises as a service that can be run behind a firewall instead of using the public cloud. AppFog works behind the firewall and as a public cloud options, while dotCloud and Engine Yard are public PaaS options.

Even though these are all competitors with different visions on how they survive, the CEOs were remarkably friendly with each other. They had slight disagreements but believe in the overall picture of PaaS growing due to mainstream adoption. The adoption of PaaS correlates strongly with overall cloud services adoption, Engine Yard’s Dillon noted.

“I predict very few companies in the future will build their own data centers,” Dillon said. “If you’re an army base or an oil rig, you might need your own fire department, but most of us will use the San Francisco fire department. We’re not going to dig our own wells to get water. Generating your own compute cycle is one of the dumbest things you can do.”

The biggest cloud services company in the world, Amazon, does not offer a legit platform for app development and is even an investor in Engine Yard. Dillon said even with Amazon as an investor, “they scare the hell out of me” based on their size and power in the market.

dotcloud’s Hykes had a different take on Amazon. He says that Amazon has been “surfing” on the success of its widely used S3 and EC2 products for a long time and that’s why they are the largest. But since cloud is growing, there’s room for other giant cloud players. “Cloud is such a tremendously huge market,” Hykes said. “There’s room for 20 companies that size.”

Some of the companies Hykes mentions could be of the PaaS variety. But yet again, that all depends on buying into the promise of PaaS. “It’s not about running apps — it’s about changing the way they are built,” Schuller said.

AppFog’s Carlson agreed with that point and later said he thinks business IT spending will shift more to PaaS in the near term.

“PaaS brings relevance to where application development is going,” Carlson said. “When it clicks, we’ll see a generational change in enterprise spending.”