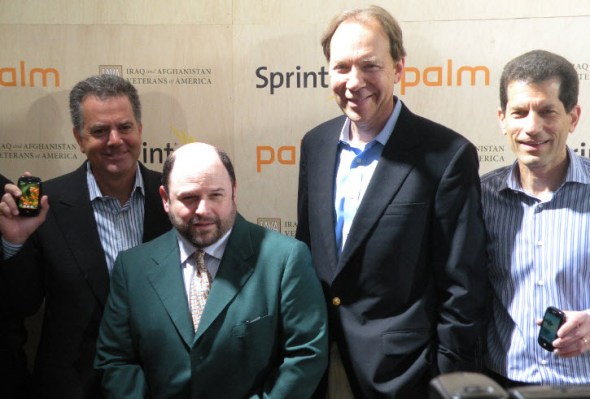 Hollywood and Silicon Valley met Wednesday night as Palm bankrolled a big party of stars to celebrate the launch of its Palm Pre smart phone.

They’re all together today at Raleigh Studios on Melrose Avenue in Hollywood along with hundreds of other celebrities. The Pre goes on sale on Saturday, but the Hollywood elite always get things early. The company spared no expense today because the Pre is the hail mary pass of the Silicon Valley company. And Palm is trying to vault above the nerdiness of Silicon Valley so that it can reach mainstream America with its smart phone, which costs $199 with a two-year plan. There’s some serious psychology and marketing savvy at work here. If you hang out with cool people, ordinary folks will think your product is cool, too. It’s branding 101. 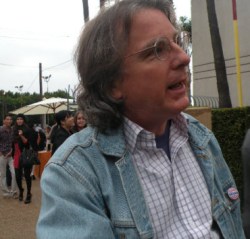 As a transplanted tech writer, I’m a fish out of water here in the land of the red carpet. Roger McNamee (right), managing director of Elevation, confessed that he feels that way too. (Of course, he’s a rock band guy himself and one of his partners is Bono, lead singer for U2 — so he’s plenty cool enough to be in this crowd). But he agrees that getting celebrities to fall in love with the Pre is the first step toward getting larger-than-life publicity and the mainstream awareness that follows. As the main investor in Palm, Elevation has an enormous amount of money and prestige riding on the Pre.

Lynn Fox, a Palm spokeswoman, confirmed that Palm isn’t actually doing a launch event in Silicon Valley for the Pre. Tonight, the Palm guys walked out on stage to tout the Pre and then Seinfeld himself did a stand-up routine to benefit veterans of the Iraq and Afghan wars.

Earlier, Sprint CEO Dan Hesse gave me a personal demo of the Pre. He was more like a celebrity from the planets that I orbit. He talked up the slide-out keyboard, the multitasking operating system, solid battery life, and the ability to sync with all sorts of contact and friends lists. He said there were four games on it, but there were no super-secret last-minute revelations about the Pre. Palm spilled the beans last week on one of its secrets: the Pre can sync media with iTunes.

Colligan, Hesse and Rubinstein all soaked in the attention, walking the red carpet that was lined with photographers who shouted, “Over here, gentlemen!” as they snapped pictures. There was earthy farmers market food, wine, and big swag bags. And hundreds of stars and other elite people I always fail to recognize. 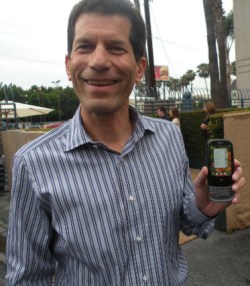 Before the event, Rubinstein told me he was excited that there was so much buzz about the product that the Sunnyvale, Calif.-based team has labored over for a couple of years. He said he wasn’t worried about what Apple might announce on Monday, June 8, at its Worldwide Developer Conference in San Francisco. He said that “they will do their thing and we will do our thing.”

The goal here is smart marketing. If it’s going to beat Apple, Palm has to rise above Apple’s appeal to the technorati. That’s a tough goal, since Apple has sold more than 37 million iPhones and iPod Touches already. Apple already occupies much of the mainstream turf. But Palm will try to snag those who aren’t in some way fond of the rarefied air of the cult of the iPhone. Palm has to remember that it’s selling something for the rest of us.

When the main event started on Sound Stage 8, Alexander of Seinfeld fame came out on stage first in a green suit, which he said “looked so good on a mannequin.” As for the Pre, Alexander said “wow, wow.” He added, “This phone has the power to end my marriage and start a new one. It’s that powerful.”

Alexander welcome Rubinstein on stage, who wore a blue-striped shirt and blue jeans. He thanked the crowd for coming and said he hoped the Palm Pre would amaze and delight them. Rubinstein gave a special thanks to Elevation Partners. “Without them, we wouldn’t be here tonight,” he said.

Colligan followed Rubinstein. He said the Pre team was maybe 10 or 15 times smaller than the teams of the
company’s rivals. Then he showed the first Palm Pre TV commercial, which starts with a bunch of people dressed in orange robes in a circle in the shape of a power button. A woman in the middle of the circle navigates a Palm. Clearly, they’re targeting women with the very zen-like ad.

Then Hesse came out and said they were “wrong when they said there is nothing fun for the whole family.”

“There are no massage parlors with ice cream and free jewelry,” Hesse joked. But he said that’s exactly what the Palm Pre is.

Hesse said the network was ready to handle the load of the launch traffic. Alexander came back out and teased Hesse about his appearances in his own Sprint TV commercials. He also made fun of the Palm commercial for having a woman on a rock in the middle of 7,000 Chinese guys. In a serious moment, Alexander thanked those who help veterans get back into normal life once they come back from war.

Of course, despite all of the cool celebrities in the crowd, there were a few geeks like me and some guys from the E3 game show, Ray Muzyka and Greg Zeschuk of Electronic Arts BioWare division, as well as Shervin Pishevar, chief executive of Social Gaming Network. Don’t tell Palm, but Shervin showed me his latest iPhone jet fighter game, F.A.S.T. (It’s actually pretty cool).