Cloud infrastructure spending in the U.S. grew 29% in Q1 2021 to a new record of $18.6 billion as the pandemic continued to accelerate digital transformation plans.

According to a new report from Canalys, that spending is also being bolstered by a recovering economy that is encouraging enterprises to prioritize projects they had delayed during the pandemic. Over the past year, the adoption of remote working, distance learning, streaming, and ecommerce had already catalyzed spending in this sector as companies were forced to adapt to radical changes in consumer behavior.

Looking ahead, Canalys projects government cloud spending will increase after U.S. President Biden’s administration announced it will emphasize modernization and security spending. This effort is bolstered by the $1 billion Technology Modernization Fund that was tucked into the recently adopted economic stimulus plan.

As a result, cloud providers are ramping up infrastructure spending to serve those needs. Amazon Web Services remains the market leader for cloud services at 37%, followed by Microsoft Azure at 23% and Google at 9%, according to Canalys. 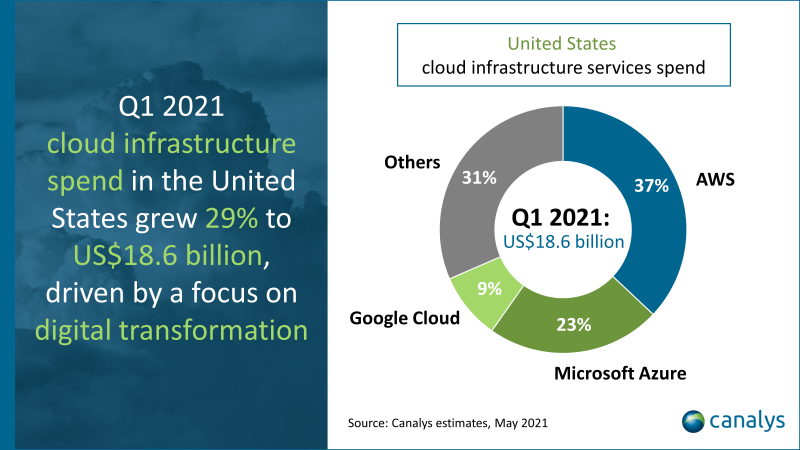 “Customers from all industries need more advanced solutions and heightened security practices from cloud service providers. The scale of rapid workload migration and the complexity of hybrid and multicloud environments is accelerating the development of datacenters’ geographic reach, capacity, and security capabilities,” Canalys research analyst Blake Murray said in a statement. “Building trust between customers and cloud service providers while emphasizing cloud security advantages will be deciding factors in cloud service provider competition in 2021.”

Geographically, the U.S. continues to be the largest cloud infrastructure market, representing 44% of worldwide spending. China is a distant second with 15%.