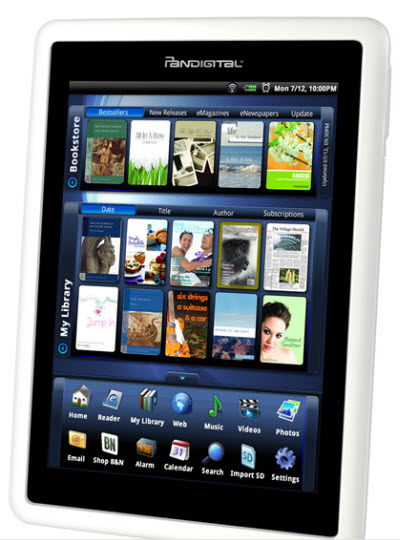 Pandigital announced today a 7-inch color e-book reader in partnership with bookselling chain Barnes & Noble. It’s an example of how Apple and Amazon rivals are coming up with alternative designs to compete with the iPad and Kindle.

The Pandigital Novel eReader is integrated with the Barnes & Noble eBookstore (which has a million books), has a full color touchscreen, Wi-Fi connectivity, and other multimedia features. You can use it to read newspapers, magazines, and a half million free classic books.

The device is designed to be simple to use for functions such as browsing, sampling, buying and downloading. Users can also use Barnes & Noble’s LendMe, which lets users share e-books with friends and family for 14 days. The screen can display images in a 800 x 600 resolution. The device is a half inch thick and weighs one pound. It has a gigabyte of internal memory and an SD/MMC memory card slot. Battery life is six hours. The device detects if it is in landscape or portrait mode and adjusts the text as necessary, and it supports a wide range of e-book formats.

The device uses an ARM11 processor and the Android operating system from Google. It costs $199 and is available in June.

Dublin, Calif.-based Pandigital is a maker of digital entertainment products such as digital photo frames and media players. Beyond Apple and Amazon, Pandigital will compete with a swarm of other e-book readers coming soon. The Barnes & Noble Nook e-book reader is also a rival. Pandigital has 72 employees and was founded as Sourcing Network in 1998. It was reorganized in 2005 and launched its first digital photo frames in the U.S. in 2006 under the Pandigital name.