Pandora has appointed cofounder Tim Westergren its new CEO as part of a broader management makeover, the company announced today,

Westergren has served as chief strategy officer at Pandora in recent years, and with this promotion to CEO he replaces Brian McAndrews, who served in the role from 2013. It seems Pandora hasn’t updated its corporate leadership team layout in some time, however, as it still lists Joe Kennedy as CEO.

“I am honored to have been the CEO of Pandora for the past two and a half years, and I am proud of what I and our team of talented and highly passionate colleagues have achieved during this time,” said McAndrews. “We have put in place a robust strategy to make Pandora the go-to source for fans and artists and position the company for long-term success in a highly dynamic space. With the team and strategy in place and execution underway, I am passing the baton on to Tim. I wish the Company all the best as it continues on its next phase of growth.”

Launched in 2000, Pandora is today available in the U.S., Australia, and New Zealand. It has traditionally differed from on-demand music-streaming services such as Spotify in that it lets you listen to personalized music stations built around a song, artist, or genre, rather than asking you to select specific songs or albums. While Pandora is free on most platforms, it comes with ads — which can be removed for $5 a month or $55 a year. Last year, the company also launched $0.99 day passes, as the California-based company began to push for the more casual listener — those who perhaps want to remove ads for one-off events such as parties.

Today’s announcement comes a month after news emerged that Pandora was working with Morgan Stanley to find a buyer, though the talks were said to be in the early stages, with nothing concrete on the table. Certainly, competition has heated up in the audio-streaming space, with the likes of Spotify joined by heavyweights such as Apple Music. This has inevitably led to increased pressure on the incumbents — indeed, news emerged back in November that Rdio was filing for bankruptcy, with Pandora agreeing to buy “key assets” for $75 million. At the time, Pandora said this would allow it to build a stronger ad-supported radio service. “The result will be the industry’s best combination of streaming radio and subscription songs on demand,” the company said in a statement.

Certainly, such acquisitions and public statements might not look like the actions of a company that’s trying to sell itself, but in order to maximize its market price, it has to be seen in the best possible light, and what we’re seeing is a great deal of “positivity” emanating from Pandora.

“We’re on the cusp of realizing an extraordinary vision: fundamentally changing the way listeners discover and enjoy music, and the way artists build and sustain their careers,” said Westergren. “We are pursuing a once-in-a-generation opportunity to create a massive, vibrant music marketplace. We have the audience, the technology infrastructure, the monetization engine and most importantly the right team with the passion and commitment to do it. I’m 100 percent committed to Pandora’s growth strategy, as is our executive team and Board.”

Of course, Westergren has to say that — the markets don’t like to hear naysaying and negativity. And Pandora’s shares have fallen dramatically from their peak two years ago, so there is pressure to turn things around both from the outside and from within. 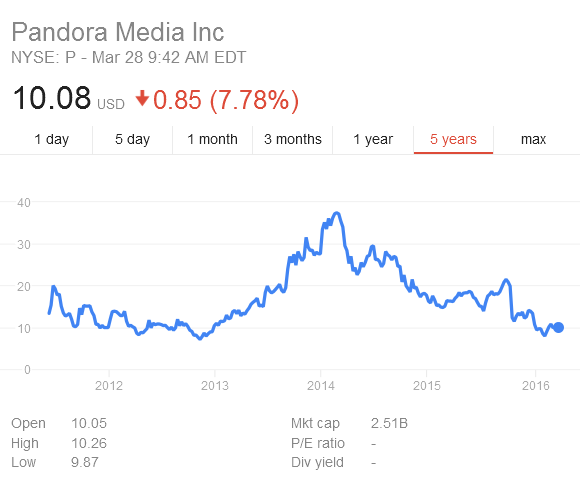 Pandora’s restructuring efforts are reminiscent of those of another tech titan currently trying to transform itself — Twitter reappointed cofounder Jack Dorsey as CEO last October. The theory runs roughly like this — a company will perform much better with a founding member at the helm because they understand the essence of the company and are therefore best-positioned to usher in a new era. Such a move may have worked for Apple when it brought Steve Jobs back, but only time will tell whether such a strategy can work at Pandora, or, indeed, Twitter.

“Pandora today is in a strong position to maximize our full potential and expand the music marketplace,” said board chairman Jim Feuille. “Tim is the ideal CEO for Pandora as we embark on our next phase of growth. As the original founder, Tim carries the vision for how Pandora can transform the music industry and he is uniquely able to connect with listeners, music makers and employees.”