Pandora’s site is a favorite among music lovers: It lets you discover new music based on your tastes and create custom playlists. However, until now, it hadn’t offered a decent mobile service — which raised questions about how it plans to maintain its edge, given the emergence of the Apple iPhone and others, such as Microsoft’s Zune.

Now you use it on your Sprint phone. Clumsily called the Pandora Everywhere Platform, it also integrates with a music-streaming hardware system made by Sonos, designed for home entertainment systems — and soon, with a new wifi-connected portable music player powered by another startup, Zing.

Pandora claims around 7 million users, and no doubt some of them will like the service. However, the move to hardware does put it in competition with the iPod and the iPhone, raising questions about the uptake; in fact, Sprint’s involvement suggests that this is an also-ran move on the part of the carrier, in reaction to AT&T’s 5-year deal with Apple.

Indeed, this has the signs of being hurried. At a product launch presentation tonight, the company said the deal was wrapped up over the over the last week and a half. Maybe Pandora’s cave to the record labels earlier this month made the company look like a less risky partner: As we reported, Pandora recently agreed to their demand that it block foreign listeners due to the difficulty in enforcing US-based licensing agreements abroad.

The Oakland, Calif. company is a classic start-up story that will be helped by these new partnerships. The service is a great way to find new music that you’ve never heard of. However, as mentioned, we have to wonder if these additional ways of accessing Pandora will be so valuable that people will choose to use it in addition to (or even instead of) iTunes.

The company is also losing money, despite running display advertising on the web. These services are a new revenue stream. The Sprint service is free for the first 30 days, then costs then costs $2.99 per month on top of a Sprint Power Vision data plan. 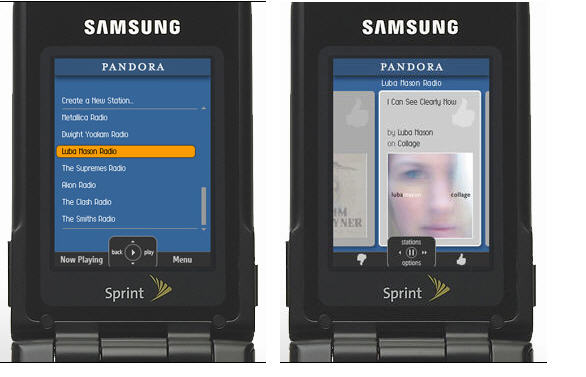