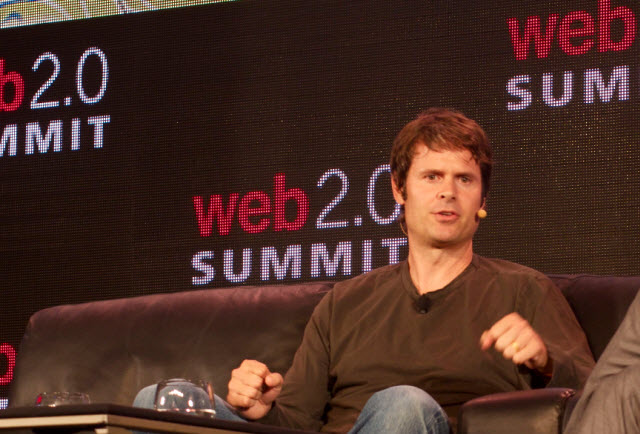 Internet radio service Pandora is getting so big across the globe that it can now challenge broadcast radio stations in a number of local markets, said Tim Westergren, chief executive of Pandora.

Pandora now has more than 37 million active users, Westergren said in an interview with Fortune’s Adam Lashinsky at the Web 2.0 Summit in San Francisco.

“We are large enough as a company with our reach to be attractive to a huge pallet of advertisers,” Westergren said. “Now we are large enough in smaller markets to attract the interest of local advertisers. That is traditionally the large source of revenue for broadcast radio.”

Pandora enables personalized radio, where you can select a channel for music from a catalog of 900,000 songs. That channel plays for you, interrupted occasionally by ads, unless you are a paying subscriber. About 95 percent of the 900,000 songs get played in a given month, Westergren said. That offers far more choice than a typical broadcast radio station.

Beyond expanding into local markets, Pandora is also expanding from the desktop computer to cars, living rooms and handheld devices. One of the biggest tectonic shifts going on, Westergren said, is the change from broadcast to personalized radio, he said. One fact working in Pandora’s favor is that it pays artists a licensing fee for every song that it plys, in contrast to broadcast radio, which doesn’t.

Pandora has been around for 11 years, but it really took off after users began listening to it on the iPhone starting a couple of years ago. Now, in certain cities, the Pandora audience is larger than the broadcast radio audience, Westergren said. Pandora is also hiring local salespeople to generate local ads now. Pandora does know the zip codes of its users, so it can run ads on a localized basis.

[Update: The Katz Radio Group points out to us that broadcast radio reaches about 242 million people weekly, whichi s far above the number of Pandora users. About 93 percent of people over the age of 12 listen to radio weekly. So it’s probably doubtful that Pandora has a larger audience than radio in a large number of markets.]

For the most part, Pandora competes with broadcast radio, which historically has commanded 80 percent of the 16 hours of listening time for music each week. Only about 20 percent of listening time is dedicated to music that people buy, such as CDs or subscription services or fee-based music such as iTunes.

Advertisers aren’t all that easy to deal with when you’re small. They may pay you $1 to reach a user one time, but they won’t pay $2 to reach the same user twice, Westergren said. Users can pay subscription fees to Pandora, to get rid of the ads and have higher-fidelity audio. Pandora has also branched out into comedy radio, and that is going well, Westergren said. But showing videos to users isn’t necessarily going to happen, he said, as an extended service. At some point in the future, talk radio or sports news might be added, since that commands about 15 percent of the radio audience.