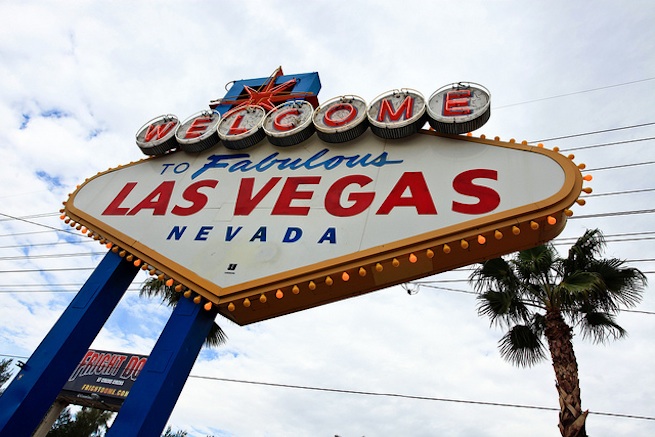 This is the third part in our series on Zappos CEO Tony Hsieh’s Downtown Project.

Silicon Valley is facing heat from cities like New York, Seattle, and Denver. Indeed, it’s no longer the only hub sparking innovation.

Las Vegas is one of these up-and-coming alternatives competing for early-stage startups. If casinos and bright lights spring to mind when you think of Vegas, you’ll be in for a shock. The area that is attracting tech entrepreneurs is the local community just north of the glamorous strip, and there’s a lot less neon here than on the more famous boulevard of casinos.

Startups are setting up shop on Fremont Street in the heart of the downtown corridor. To cater to the needs of the new arrivals, new office spaces, co-working spots and trendy restaurants have rapidly emerged.

The tech titan responsible for much of this development? Tony Hsieh, chief executive of online retailer (and Amazon.com subsidiary) Zappos.com, which is currently headquartered in a nearby suburb. By the end of the year, thousands of Zappos employees will relocate to the downtown area, and development is rapidly underway.

Part 2: Health and education in Vegas

Entrepreneurs typically work out of a hip downtown Vegas coffee shop, The Beat. A co-working space called Work in Progress just opened a second location, the 6th Street Workspace, which costs a mere $50 a month for Wi-Fi access, admission to networking events, and other benefits.

Unlike many tech hubs, where investment is in short supply, Hsieh has set aside $50 million for what he’s called “the Vegas Tech Fund” to invest in startups. Already, the team has invested in about 20 startups. Before taking the capital, the founders usually agree to relocate to the area, or to open an office in Vegas.

The Vegas Tech Fund is just one small piece of the Downtown Project, a $350 million privately-funded initiative to rebuild the city. Read the rest of the story here.

Jason Kay, a principal at Los Angeles-based Kay2 Ventures, is a frequent visitor to Vegas. He’s one of a growing number of tech investors keeping a close eye on the city.

Above: A coworking corner and ‘tech library’ in downtown Vegas

Kay said he would fund one of these Las Vegas-based companies for a highly pragmatic reason. These startups are headquartered just a stone’s throw away from potential customers — some of the largest hotels and restaurants in the nation.

“Service-oriented businesses should be where their customers are,” said Kay. “In Vegas, you have a gigantic in-built test bed.”

Furthermore, early-stage startups have a longer runway than in Silicon Valley. The Nevada income tax rate is zero, office space comes cheap, and founders also may have an easier time hiring developer talent, potentially even luring employees from Zappos.

Maren Donovan, CEO of Zirtual, a startup funded by the Las Vegas Tech Fund, told Inc that she no longer feels like a small fish in a big pond, as she did in Silicon Valley. Now, she frequently socializes with Hsieh’s high-roller friends.

Another strong startup in the Vegas Tech portfolio is media company Tech Cocktail. It boasts an editorial team that reports on the local startup scene and also hosts speaking events and socials to bring together the tech community.

At one such event during a recent visit, I met Hartej Singh Sawhney, an entrepreneur who recently relocated to the area. Sawhney lives and works out of the Ogden, a luxury apartment complex downtown, and pays just over $2,500 a month for a personal suite and office space for his startup. That’s a fraction of what it would cost to house a business in San Francisco or New York.

Plus, the large number of tourists is actually a positive thing from Sawhney’s point of view.

“Vegas is the only place in the country that constantly attracts people from the around the world to visit Thursday through Sunday and then they return back to their homes,” he said. “This transience can be unbelievably beneficial to a startup.”

Will Young, general partner at the Vegas Tech Fund and a long-time associate of Hsieh’s, told me the investment team is also paying close attention to fashion tech. Young is confident that entrepreneurs will take the funds as they can tap into the collective wisdom and connections of the Zappos executive team. In e-commerce circles, Zappos is respected for its order fulfillment and customer service expertise.

Above: Romotive’s team hacking robots at the Ogden

For all its attractions, the Vegas startup scene is still tiny compared to many other regions. That may not matter much for early-stage startups, but for later-stage companies, Vegas offers much less access to capital, engineering talent, and potential partners.

The community has good reason to fear that entrepreneurs who reach a certain phase of growth will pack their bags for Silicon Valley.

One of the Vegas scene’s star companies, Romotive, is leaving Las Vegas after getting its start there. Romotive is building an affordable personal robot. After raising a first round from elite Silicon Valley-based venture firm Sequoia Capital, the team announced that it will move to California so it can hire more experienced roboticists.

“Being here will preclude us from growing as fast we need to grow,” said Romotive’s CEO Keller Rinaudo in an interview with VentureBeat.

As the company continues to pull in revenues and new customers — and begins to consider a larger round — it makes sense to be located within driving distance of the largest venture firms, who are capable of cutting even larger checks than Hsieh and his cohort can manage.

The news of Romotive’s departure has caught the attention of the press. PandoDaily‘s Sarah Lacy pronounced that 2013 has been “less kind to the Vegas startup community,” and she noted that Hsieh appears to have pared down his original goals.

And tragedy struck the community in the wake of this news: Local entrepreneur Jody Sherman committed suicide in February, and his startup Ecomom was subsequently liquidated.

To be fair, it’s still early days for the Downtown Project, and setbacks and tragedies are unavoidable in any long journey.

Romotive’s founders acknowledge that they wouldn’t have done so much, and so quickly, without the Vegas Tech Fund. It’s just that Romotive is growing faster than Vegas can accommodate right now.

“Building a city from scratch takes time — and that’s what they’re reaching for,” said Rinaudo.

Can we build a tech hub in any city?

Hsieh’s Downtown Project is more than just another alternative to Silicon Valley. It’s a city that is proving what Internet entrepreneurs are capable of.

By contrast, Washington, D.C. shows how not to create a tech startup ecosystem.

When the recession hit, policy-makers in D.C. placed their faith in technology to pick up the slack. They looked toward the startup sector to create jobs and bring innovation to sectors like health and education.

But the promise has not borne out. Washington startup founders have been accused by economists and researchers of increasing unemployment and exacerbating wage disparities between an extremely elite group of techies on the one hand, and everyone else on the other. In a city like Washington, where economic disparities between rich and poor are already quite stark, that was a crippling critique.

This may also be true in San Francisco, a city that is homogenizing, losing much of its funky, pre-tech-boom character, and displacing the working class.

Above: Hsieh hopes his model will be replicated in other distressed cities.

By contrast, the Las Vegas Downtown Project seeks to avoid those pitfalls by building up the local community, including small businesses, along with tech startups.

As a guest to Las Vegas in May, I saw a glimmer of something special. I saw first-hand that entrepreneurs can build both businesses and communities.

With his entrepreneurial mindset, Hsieh is ruthlessly tackling massive civic problems and is quickly enacting change.

It’s also a highly-inclusive effort, at least on the surface. For example, Hsieh invites members of the community to leave post-it notes on the wall of his apartment with suggestions for their dream neighborhood.

His organizational efficiency doesn’t hurt either. Hsieh has placed faith (and millions of dollars) in his advisors and employees to lead critical tasks, like opening a new school or building a family practice clinic.

However, due to the speed of the developments (Hsieh gutted and renovated the seedy, smoke-filled Gold Spike casino in a matter of months), some locals feel they’ve been shut out of the process.

But Hsieh is convinced that these local battles will resolve themselves in five years or so when more bars and co-working spots pop up in the city. Meanwhile, the Downtown Project is speeding along at a rate that makes traditional corporate redevelopment efforts or government agency projects look glacial by comparison. To borrow as phrase from startup jargon, this grand experiment in urban planning has the potential to be a “game changer.”

And that, more than simply increasing his wealth, seems to be Hsieh’s real goal.

“We will make money in the aggregate — but we want to come up with the model that can be replicated in other cities and communities,” Hsieh told me.

With jobs already being created in the region, the hope is that the Downtown Project will serve as a model for community restoration that is sorely needed in the domestic economy and beyond.