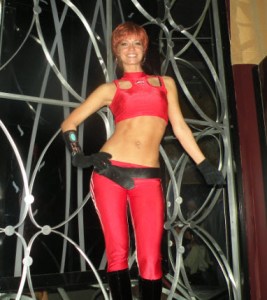 Advanced Micro Devices said Friday it will cut nine percent of its staff — about 1,100 workers — and will reduce pay temporarily for its remaining workers as it tries to survive the tough market for PC chips.

Here are some photos from the good times last week at AMD’s party at the International Consumer Electronics Show last week in Las Vegas. It hasn’t exactly been a party at AMD, the Sunnyvale, Calif.-based maker of microprocessors and graphics chips, in the past couple of years. The company has lost $5.6 billion in that time.

The cutbacks are the third round in a year. About 900 cuts are layoffs while the rest are through attrition and the previously disclosed sale of a digital TV business unit. The 12,000 remaining workers will see pay cuts, with CEO Dirk Meyer and chairman Hector Ruiz seeing 20 percent pay cuts. The rest of the staff will see pay cuts of five percent for hourly workers, ten percent for salaried workers, and 15 percent for executives. Those cuts are supposed to be temporary. In the U.S., AMD will also suspend matching payments to the retirement funds of its employees and postpone the start of a matching program in Canada.

The company is still in the midst of splitting itself in two to sell off a big part of the company to the state of Abu Dhabi. That move will separate AMD into a chip design firm and a subsidiary that will manufacture chips. The cutbacks are no surprise since Intel yesterday detailed the steep nosedive in demand for personal computer chips in the fourth quarter and offered a grim out look for the months ahead. The layoffs will all be in the product side of the company, not the manufacturing side. 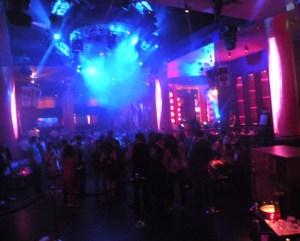 AMD cut back its earnings forecast on Dec. 8 and plans to report earnings for the fourth quarter on Jan. 22. Sales are expected to be about 33 percent lower than a year ago. The company launched a series of new chips at the International Consumer Electronics Show in Las Vegas last week a bid to make a comeback, but it has no offerings for popular low-cost netbook market and can’t afford to match Intel in every chip market anymore.

The positive thing is that AMD has been regaining market share in the past six months in the graphics chip market since it launched a more popular series of chips in June. At CES, AMD launched new mobile graphics chips.

I attended the company’s party at the swanky Prive nightclub at the Planet Hollywood Casino, where the pictured dancer was doing her thing in the VIP area. But it definitely looks like the party is over. We’ll see if AMD can hang in there. It shows up on the lists of companies that might not survive 2009. In the past two years, it has lost $5.6 billion.