Google clearly has big ambitions for its Internet-connected Nest and Dropcam hardware. A new patent shows how these gadgets — and a host of other devices — could be tied together into the smart home of the future.

In September 2014, eight months after Google acquired Nest for $3.2 billion and three months after Google’s acquisition of Dropcam for a reported $555 million, several Google employees applied for a patent called “Security Scoring in a Smart-Sensored Home.”

The name is somewhat deceiving, in that it doesn’t mention the more significant technologies addressed in the patent.

What the patent appears to focus on is a way of tying together various devices to make smarter automated decisions about what’s happening in your house — and what should happen.

Some of the patent, which was formally published yesterday, discusses potential software features, including “security scores” for quickly signaling if people are correctly using their security systems. There’s also an idea for a monthly, yearly or lifelong service for alerting people to intrusions and notifying emergency management agencies.

A “smart alarm clock” could wake people up based on how long it takes for people to get ready to leave the home. And multiple smart homes can be aggregated into “neighborhood security networks” that can tell people in a specific geographical area about nearby events like fires or break-ins.

But more intriguingly, the patent application contains schematics and descriptions of hardware devices that are not currently part of Nest’s lineup, including a smart doorknob (with a lock) and a smart doorbell, among others.

Of course, these technologies, described as they are in a patent application, may never come to market. But it is clear that people inside of Nest are thinking of ways for parent company Google to expand its reach and its market share inside the home.

And it wouldn’t be very surprising to see Google moving toward home security. For one thing, Google in December was close to partnering with ADT, according to a report from Forbes.

The technology in the patent with the greatest potential impact is a “smart doorknob” that comes with a remote-controlled lock. Should Google-owned Nest begin to sell these, they would challenge startups like August as well as more established companies like Kwikset.

A “smart doorbell” could recognize the person coming toward the door and communicate visual or audio information through some other system.

From there, a “registered mobile device” (a phone or something else) can remotely unlock the door, according to the patent. 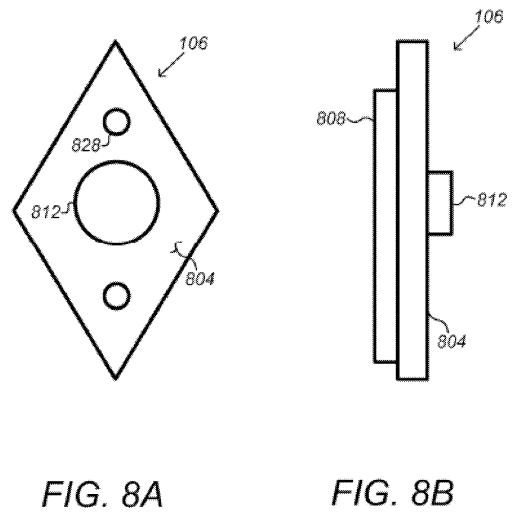 Above: Google’s smart doorbell concept, in the patent application “Security Scoring in a Smart-Sensored Home.”

The patent also includes two-part Internet-connected “smart entry detectors,” which can be affixed to windows or doors and the walls next to them. These systems can be armed, so they then sense when windows or doors are opened or broken. They can send messages through wireless communication systems like ZigBee. 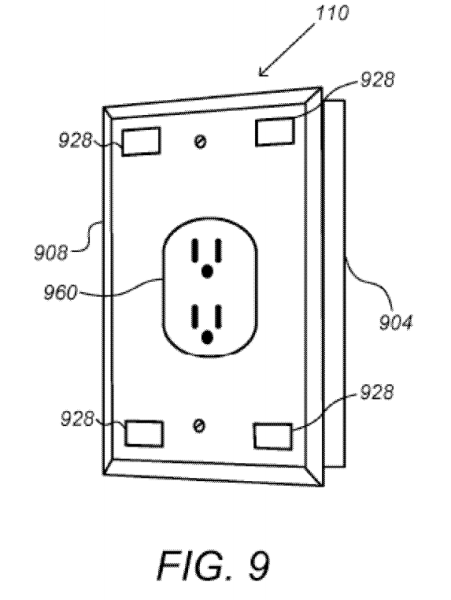 Above: Google’s smart wall plug concept, in the patent application “Security Scoring in a Smart-Sensored Home.”

Additionally, the patent mentions “smart wall switches” for picking up on lighting conditions and dimming lights when necessary, and “smart wall plugs” for controlling fans or air conditioners.

Some or all of these tools could come together and draw on artificial intelligence in a way that goes beyond what, say, the Nest learning thermostat can do. 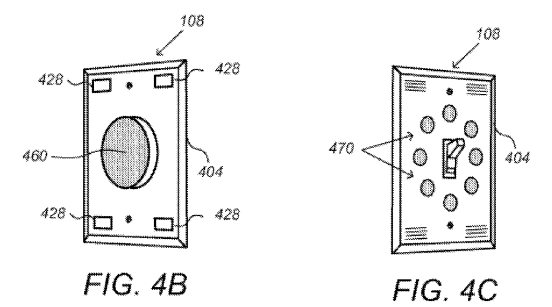 Above: Google’s smart wall switch concept, in the patent application “Security Scoring in a Smart-Sensored Home.”

From the text of the patent:

“…[A]rtificial intelligence algorithms are capable of making rules-based or learning-based inferences about when the user intends to leave the home based on sensed patterns of user control of smart-home devices, optionally in conjunction with sensed home conditions or other sensed user behaviors. …

By way of example, for one embodiment, one or more of the light switches is configured to process information acquired by home occupancy sensing devices in conjunction with information from light switch control behaviors of the user to predict when the user intends to leave the home.”

Check out the full patent to learn more.