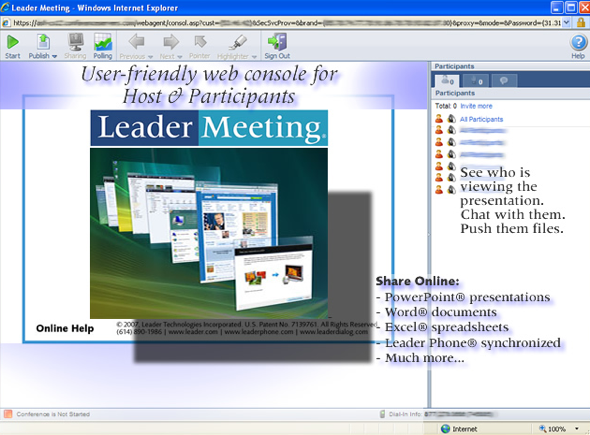 Leader Technologies, a provider of web-based enterprise software for groups, is apparently suing Facebook. It claims the popular social network is infringing on a patent it obtained in 2002, that “relates to a method and system for the management and storage of electronic information.” Facebook tells me it hasn’t seen the complaint yet, although Leader issued a press release earlier today saying that it has already filed the suit in Delaware.

Maybe the company is just trying to drum up some publicity by issuing a press release? In any case, its claim — on its face — looks impressively weak.

Columbus, Ohio-based Leader Technologies doesn’t explicitly offer a social network. Instead, it sells a set of for-pay services, including a “web conferencing” service called Leader Meeting (pictured above), wherein you can upload documents, share them, chat, and oh so much more. The company web site says its software was used by the state of Louisiana to coordinate a response to Hurricane Katrina.

So why sue Facebook and not every other web site that allows people to share information? What about web-based business software company Salesforce.com, what about rival social network MySpace, what about hundreds of enterprise companies that offer web-based sharing features? Maybe Facebook’s mantra about being a “social utility” — not just a social network — woke up this troll.

Nick O’Neill of AllFacebook thinks Facebook might have to pay up (and he has a copy of the patent up on his site, for the curious). I’m not sure. A top patent court has recently ruled against the validity of patents that don’t involve some sort of “machine or transformation” — I wonder what “machine or transformation” Leader has to offer here? I’m no legal expert, but it’s not clear to me, after reading through the patent. I’m guessing Facebook, if not the rest of the web-based tech industry, won’t be losing too much sleep over it tonight.