Path of Exile’s players enjoy betrayal  — so much so that they made Betrayal a landmark expansion for the online role-playing game. And now Grinding Gear Games is ready to synthesize that goodwill for its next expansion.

During a recent media briefing, general manager and cofounder Chris Wilson broke down how players behave around expansions. All this was in advance of Synthesis, Path of Exile’s most recent expansion. He reiterated that Betrayal is Path of Exile’s most successful expansion, with nearly 200,000 concurrent players. This doesn’t even include those playing in China or Taiwan or on the Xbox One.

And now it has the PlayStation 4 audience to count on, as Path of Exile launched on Sony’s console last week.

“We’ve seen consistent growth up to the 3.0 megaexpansion [The Fall of Oriath, with the Harbinger Challenge League], and since then, we’ve seen higher user numbers in both the 3.30 [Incursion] and also 3.50 expansion [Betrayal], the one from December,” said Wilson. “We’re very pleased with Path of Exile’s growth over the years, especially now that it’s a game that’s been out in some form for six or seven years.”

The boost in players comes of after Grinding Gear saw a dip with Delve, the challenge league that sent players into an infinite dungeon set in a mine. This started back with the Incursion content update.

“During 3.30, we saw quite an amount of players leaving as they played. During that league, people left at a faster rate than normal. We have many theories as why this could be. One of the theories is that there were other games for people to play.”

While Path of Exile has a dedicated player base, it’s the sort of live-services game in which people bob-and-weave in and out depending on if the new content release meshes with how they play. And even if they’re into it, they don’t often play every single day during these three-month-long releases. 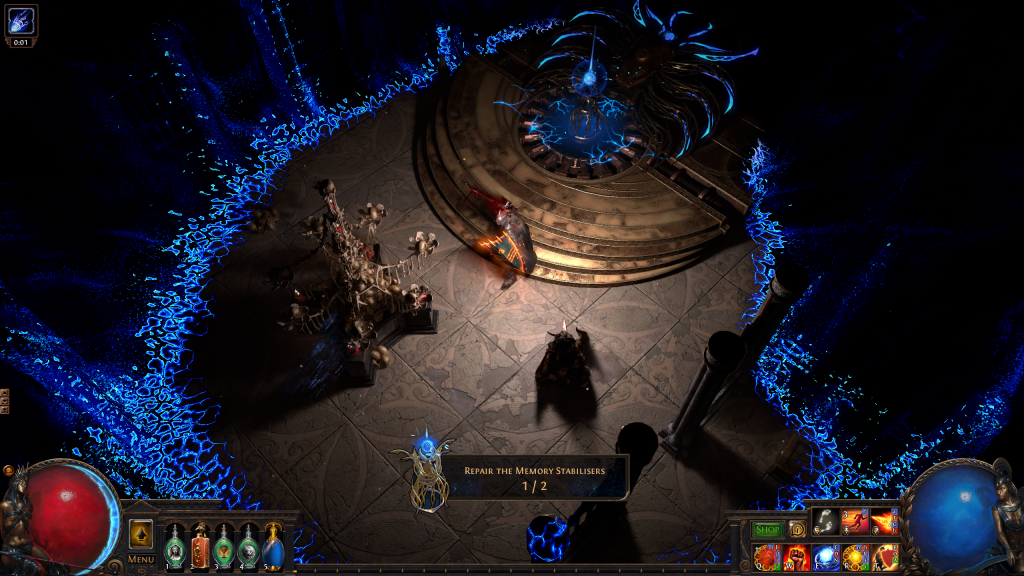 Above: The blue area represents a memory collapsing. You destroy monsters to delay it.

And other games do come out, and Path of Exile’s audience drifts off to those. Other live-service games attract Path of Exile players as well, like Warframe. This is also not that big of a surprise — I player both Hearthstone and Magic: The Gathering — Arena, two online card games. It’s easy to see fans of action-RPGs enjoy both Path of Exile and, say, Warframe, or give a battle royale shooter like PlayerUnknown’s Battlegrounds a go.

“We’re interested in looking at other thing as competitors and not just action-RPGs. Things like Fortnite, Warframe, and that kind of stuff. It’s interesting because Warframe had a very successful period of expansions on Steam at that point. If you look at free-to-play games, their numbers were very high we were tailing off. So my theory is that people had some very awesome games to play.”

Betrayal proved to be a hit with the players, resulting in the best concurrent numbers Grinding Gear has ever seen (the studio used to give out registered players numbers, but it’s since moved to concurrents because it feels like it’s a better measure of how engaged they are).

“Having said that, they came back for the release of 3.50, which was very pleasing, and obviously that’s our business model — repeatedly jam good content out there, and when people have time to play, they will do so, and if things are taking away their time, we’ll have lower numbers for that period, and once those things are gone, we’ll have higher number again.”

The triple-A blockbuster season that begins in late August and peaks in November could also impact player numbers.

“That could very well be the case. I’m not entirely sure. We had a theory we had a theory that we were banning users too agressively for cheating during that period. We investigate that quite a lot. There’s a lot of things that contributed, and maybe 3.30 was bad and people weren’t around for 3.40 [Delve] because the previous one had low retention. I’m not exactly sure. Internally, the metrics have been fine. We’re not that concerned because the numbers are still really high regardless if they were down slightly. We expect we’re not necessarily going to see growth quarter-after-quarter reliabely. The Christmas period, 3.50 was amazing.”

And sometimes, your own promotional efforts result in up-or-down releases. Grinding Gear

“And 3.1 [War of the Atlas] was down probably down because compared to the megaexpansion marketing for 3.00, it was just a normal expansion. It’s also worth noting that there is kind of a degree of timing related to our other regions and stuff. Let’s say we release the China equivalent version on time, the same week. The Chinese players will just play that. And for various logistical reasons, it’s a week or two behind, they have a holiday and we have to dodge that, there’ll be a couple of weeks where all the core Chinese players will jump on our servers for a couple of weeks before they play their version. And that could make a difference in terms of launch numbers.”

“But the short answer is ‘I don’t know.’ But I’m still pleased with the results,” Wilson said. “I like being able to say that our best release ever was the most recent one, and the best release ever was in late 2018 for a game that entered its internal alpha in 2010 and beta in 2011 and so on.”

And that may be more players now than ever before after Path of Exile’s launch on the PS4.