“It’s an additional dimension of character-building, and of course there are some feats and powers that click together, and some that extremely not, from paper to digital, and we’ll find this out before it happens for the players,” Mishulin said. “And also, we want you to feel powerful. So all your abilities, whether you’re a lich or a trickster or an angel, they are really powerful and kinda game-breaking, but we will have counters for that.”

Take the trickster. Mishulin says that at certain times, they can manipulate the world itself. It’s a high-level ability. When they miss (with a roll of a 1 on a 20-side die), they can change it to a 20. “And you see the roll changes before you, as he’s tweaking the dice that underlay the world and the game.”

[As an aside, this reminds me of the most enjoyable magic item I ever created for my old D&D group: The Orb of Boonedoggerish Luck, which turned all natural 1s into natural 20s. I made it for a friend (whom we sometimes called “Boonedogger” and who rolled an inordinate amount of natural 1s. Of course, once he got this, his first roll was a … natural 20.]

You’ll also face some disadvantages. What happens when you start adventuring as a lich?

“We still want you to feel powerful, so the positives will be better than the negatives. But there will still be some negatives. Some of this will come from the story and your relations to your companions, because not all of them will like what you’re doing and what you’re becoming,” he said. “Some of them are really good-natured … and they will not look kindly on you turning into an evil mastermind, a master of necromancy.

Demons are the adversaries in Wrath of the Righteous. In the adventure path, you end up matching wits with powerful nobles and lords such as Baphomet, the succubus queen Nocticula, and Deskari, Lord of the Locust Host (who also is known as the “Usher of the Apocalypse.” I was curious about what Owlcat thought of the demonic foes they’d be throwing at players in their next game.

“The one I do like most I can’t tell you about the most because it would spoil the story,” Mishulin said. “I really like balors. If you play them right, they can be very smart, intimidating opponents and leaders of the demon armies.”

The Pathfinder balor, of course, is similar to the powerful balor from D&D, itself largely influenced by the balrogs of J.R.R. Tolkien’s Middle-earth.

Shpilchevskiy picked one a little more … weak. “I personally like dretches. They’re quite funny. It’s interesting that there are some funny moments in the supremely dark atmosphere of the 100-year crusade.”

The second time around

At launch, Kingmaker had issues. It had a lot of bugs: long loading screens, long bootup on slower, older hard drives, trouble with spells and cleric domains, and many more. It also had some balance issues and other opaque mechanics, such as needing area-of-effect damage to kill swarms of creatures like spiders (this was an infamous issue with one early quest). This was Owlcat’s first launch, and managing a game of this size and scope is a challenge for many studios, especially smaller, independent houses.

“That was not a pleasant moment,” Shpilchevskiy said about Kingmaker’s launch. “Those days, we experienced a lot of troubles and technical issues, and some of them, we could’ve predicted them. … We realize that actually, we had to invest our events into polishing the game.” 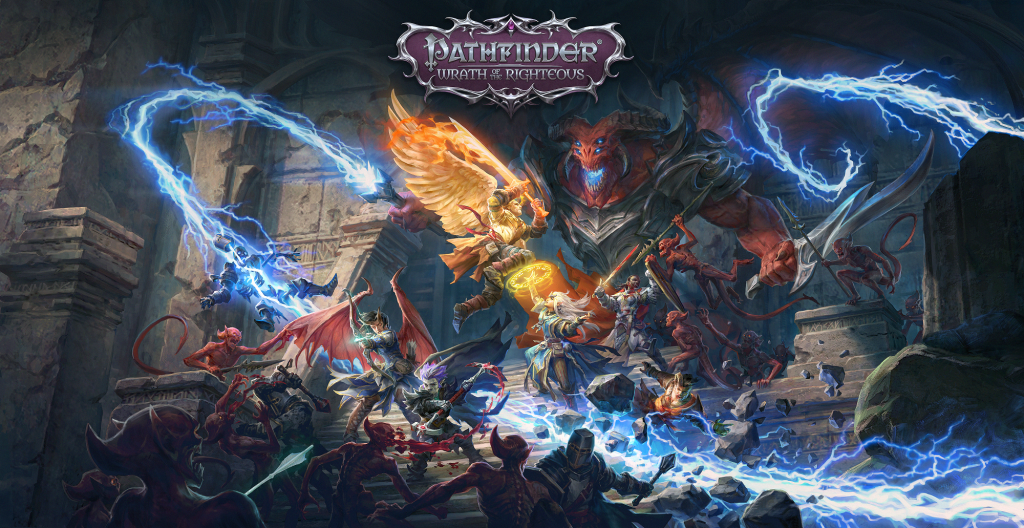 Above: Demons and angels star in Wrath of the Righteous — but I’d love to see some Slaadi.

Part of this came from the nature of the Pathfinder system. Shpilchevskiy said that even they didn’t realize some of the interactions with the complex ruleset, and even parts that they had polished several times still had aspects that players were able to exploit … or whose decisions resulted in bugs. “Some interesting, and some not so interesting bugs,” he said. “This time, we’re focused on maintaining the quality at the best level and invest a lot of efforts in what is functional quality assurance, what we’re doing right now, and some technical instruments we’re using now to ensure that quality is the center of our focus.”

The $1 million in funding should help with this, along with the knowledge gleaned from making Kingmaker and learning how to best balance the complicated Pathfinder system. And larger companies like Larian Studios (Divinity: Original Sin) and Obsidian (Pillars of Eternity) have had their share of issues with bugs and balance with big, complicated RPG systems and interactions.

“With a classical RPGs, the amount of choices are so big that they tend to lead to very, very complex systems. And right now, when we design the game, we are going to, mind you, not reduce the complexity, but to visualize this complexity fully to understand if we have some branches that are not addressed, and we’ll need to do this,” Mishulin said. “And it’s all part of that special effort that Oleg talks about. It’s special tools that allows the writer and model designers to understand what information they bring along from one story to another story and how they can all address it.”

One way they’re addressing this is with a system a bot system that’ll play Wrath for hours upon hours during development.

“[It will] try to explore as many branches of the decisions tree as possible,” Shpilchevskiy said. “Now, this bot has played several hundreds of hours, and we believe it will help us find a lot of issues that just couldn’t be found by a functional test.”

Mishulin related one story of an unexpected interaction from Kingmaker, the sort of thing they hope the bot and testing catches before launch with Wrath.

“We received a save that led to the player losing the game due to Vordakai [a foe who can become your adviser] destroying the kingdom with his magical Oculus,” he said. “You pressed next day, and your kingdom gets destroyed. The problem is that Vordakai gets killed by this player, and somehow, the Oculus still ends up working. It took us a while to understand that what really happened was that this player was rushing to kill Vordakai because he was getting the warning that his kingdom would get destroyed if he’d get into this dungeon. … He actually killed Vordakai 6 minutes before the next day started.”

But, Mishulin said, they designed the kingdom to grow on a daily basis, not a minute basis. “And this late day didn’t actually count for this player,” he said. “And by the goal day, he was already dead. But the system will dock him the next day.”

Mishulin said by the time they’d received this bug report, Owlcat had fixed the problem. But they’d learned was actually “the James Bond of this fight against Vordakai.” He’d managed to accomplish his goal 6 minutes before the cutoff, but because the game didn’t recognize minutes in such a manner, it still killed the player. Even though he should’ve been alive.

Let’s just hope that this time, Pathfinder: Wrath of the Righteous won’t kill anyone after they pull off a James Bond-esque move.