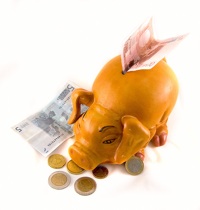 Have you ever complained that your computer was just too darned powerful? Have no fear, Microsoft has filed a patent for a different kind of computer business model that answers your prayers. The patent was filed back in 2007, but the U.S. Patent Office published it on Christmas Day 2008, and CNET’s David Meyer spotted it earlier today.

It’s not clear how seriously Microsoft is pursuing this plan; after all, this is just a patent application for “a method of operating a computer with scalable performance,” not a design for an actual product. Still, it’s a compelling idea, if only because it’s a fundamentally different way of selling a computer. Instead of paying for all the hardware and software upfront, the initial purchase price would be subsidized by the manufacturer, then the user would pay based on how intense their demands are — for example, Microsoft says it could charge $1.00 per hour for an “office” bundle, $1.25 for gaming, and $0.80 for web browsing.

“The current business model for computer hardware and software relies on a user purchasing a computer with hardware and software that is suited to the most demanding applications that the user expects to encounter,” Microsoft writes. “Therefore, a user may buy a multi-core processor with a significant amount of memory and advanced video support for gaming applications that are only used on the weekend, while the user’s day-in, day-out activities may involve little more than word processing or web-browsing.”

Under the proposed model, users only have to pay for the needs of the moment. On the face of it, this doesn’t sound like a completely ridiculous idea — after all, there are plenty of products, from video game consoles to cell phones, where the initial price is subsidized and companies make up the cost in fees later on. The software-as-a-service business model, where users pay as they go for software via online subscriptions, is working out well for Salesforce.com, despite the downturn.

Still, I’m less-than-thrilled about the prospect of getting billed every time I want to use my computer. That sounds like a recipe for frustration, especially since Microsoft acknowledges users are likely to pay more in the long run than if they just bought everything outright. In fact, that kind of pay-to-use model is exactly what Philip K. Dick skewered in the opening chapters of his novel Ubik, where the protagonist Joe Chip’s electronics constantly demand payment. Dick’s dystopian future probably isn’t a great model for consumer technology.