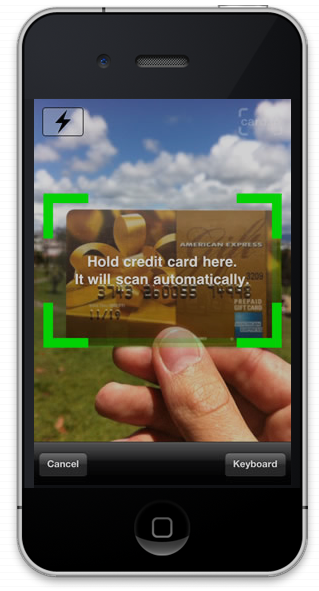 Anyone who has ever typed their credit card information on a mobile keypad will appreciate Card.io. The company offers a software-based credit card payment solution for smartphone developers, and they are competing today in MobileBeat’s 2011 Startup Competition in the infrastructure category. (The winner will be announced later today.)

“Most consumers don’t have separate hardware to swipe a credit card,” says founder  and CEO Mike Mettler. “Hardware makers are not opening up their system to developers, and NFC (Near Field Communication) payments are still one to two years down the road. Being software-based, it’s easier to adapt to the dynamic market and reach users directly.”

“Think of Card.io as Square without the Square,” says Mettler. “The app developer can store the credit card information, but we are more concerned with that initial transaction of getting the data.”

He points out that a card must be scanned every time, unless the app developer stores the data on their own. They also don’t do the actual processing.

“We could do that in the future if there is demand,” said Mettler.

The investing interest in mobile payment companies is growing. A study released today by KPMG predicts mobile payments could be mainstream within two years, based on a survey of executives in financial, tech, telecommunications and retail industries.