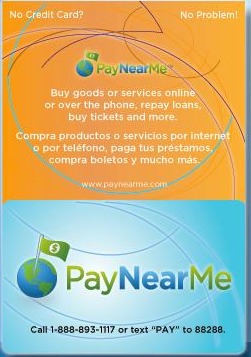 Cash payment service PayNearMe, formerly known as Kwedit, announced today that it has grabbed another $16 million in funding and is launching a new mobile payment option.

After submitting your phone number, you just need to grab a PayNearMe card from a 7-Eleven store, and reply to a text message sent by the service with the card’s unique identification number. Then you just hand the card to a 7-Eleven cashier and pay for the amount owed with cash.

The company says it will be using its funding to add new retailer payment locations as well as new services. PayNearMe also announced that Mark Britto, CEO of mobile payment company Boku, will join its board of directors.

The company’s Kwedit Promise service is also still running. It allows consumers to receive digital goods with a promise to pay for them later with cash at 7 Eleven stores, by mailing cash, or by asking friends or relatives to pay for them.

Just as it was when we initially covered Kwedit, paying cash for virtual services still seems like a compelling choice for many consumers. The company says that over 50 percent of adults in the U.S. would rather pay for purchases using cash, and over a quarter of households don’t have access to credit cards or bank accounts (which gives you access to debit cards).

PayNearMe is based in Mountain View, Calif. The funding round was led by Khosla Ventures, and saw participation from new investor August Capital and current investors True Ventures and Maveron. The company previously raised $6.3 million in funding.