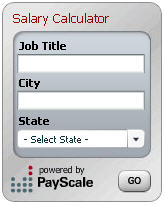 PayScale, a Seattle start-up that shares salary information with Web users who share their own, has just released some useful tools for job searchers.

First, there’s the widget pictured here, that folks like us at VentureBeat can place on their job boards (we’re considering doing this). Even more useful is their new feature that pops up salary information about specific jobs as searchers scroll over job listings. See below for an example of a pop-up when you scroll over a listing for a software engineer.

PayScale, a Seattle start-up with about $10 million in backing from Trinity Ventures, Fluke Venture Partners and Madrona Venture Group is taking advantage of a flight by users online when they’re doing searches for important things like jobs. These Web widgets make it more nimble than the public company Salary.com, which does not solicit salary information directly from people, and instead relies on industry surveys. While in some ways you can consider Salary.com surveys more rigorous and vetted (less prone to capricious Web users submitting info anonymously), they do have conform to rigid categorization — and this often doesn’t allow for consideration of specific skills. By contrast, PayScale can show information for an advanced programmer, but also show how that changes if they know AJAX. It takes into consideration things like location, company type and size, experience, education, skills.

There are other players offering salary information, such as Indeed, but they are scraping information from job listings; it doesn’t come from people actually employed. There’s Payscroll, yet to launch. Finally, there’s Salaryscout which, like PayScale, solicits salary information directly over the Web, and in some ways has more Web 2.0 features. It has RSS and commenting, for example. PayScale says it doesn’t have such features yet because it feels they haven’t gone mainstream, and it has focused on deals like it announced today with CNET — integrating the PayScale pop-up (again, example below). PayScale also boasts impressive research, and has a sophisticated search.

It will also be unveiling more ways to slice and dice whether jobs are well compensated. Its research takes into account multiple variables like commute time, for example, so human resource managers know that if someone is traveling 45 miles to get to a job, well, it must be pretty attractive, and highly paid. The manager may conclude they could offer less for someone living 15 miles. PayScale makes money by charging users for more detailed compensation information, and by selling information to HR managers at 3,000 companies (your data is kept anonymous). 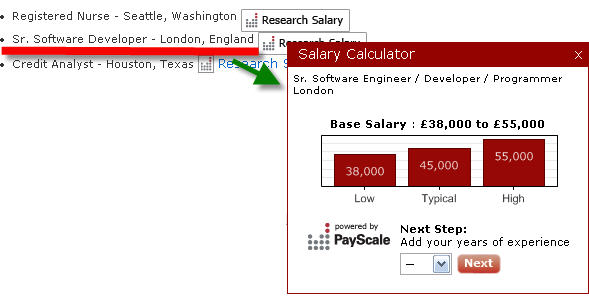