The global PC industry is an awful place to be, with record drops in the past seven quarters and an overall slump of 5.6 percent in 2013, according to the latest numbers from IDC today.

The former hardware division of IBM grew a comparatively huge nine percent in unit shipments in global shipments during Q4 2013, and an even bigger 10.8 percent in the U.S. Apple meanwhile, which used to buck the trend of contracting traditional PC sales, dropped 5.7 percent in the last quarter of 2013, and 3.3 percent for the full-year number. 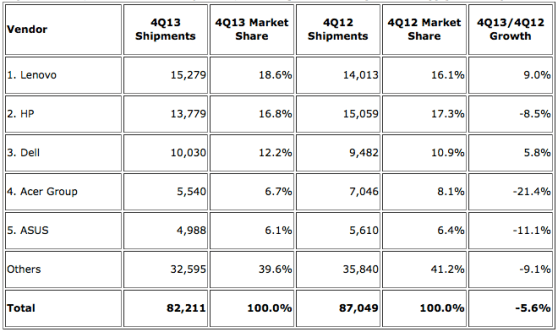 In addition, Apple dropped from third to fourth in manufacturer rankings late in the year.

For the full year, Lenovo shipped almost 54 million PCs, growing slightly from just over 52 million, while former global leader HP dropped 8.5 percent in shipments to 52 million. Dell dropped 2.4 percent globally as well for the full year, but rebounded to grow 5.8 percent in the last quarter, for almost 38 million full-year sales.

IDC feels that after seven quarters of pain, there’s good news ahead. 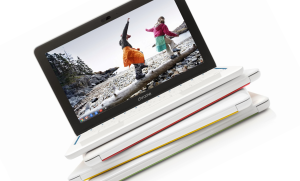 “Total shipments have now declined for seven consecutive quarters, and even the holiday shopping season was unable to inspire a turn in consumer spending,” VP Loren Loverde said in a statement. “Although U.S. growth slipped a little in the fourth quarter, other regions all improved, reinforcing our view that growth rates will continue to improve gradually during 2014 despite remaining in negative territory.”

I suppose that when results have been truly awful, less bad becomes good. But the true pain, of course, is reserved for Acer.

The low-price leader is slipping badly, with annual shipments down a massive 28.5 percent, dropping from 33.6 million units in 2012 to just 24 million in 2013. Acer didn’t even make the top five vendors list in the U.S. for either the fourth quarter or the full year.

“Asian majors like Lenovo and Samsung achieved strong double-digit growth, driven partly by a modest commercial uptick and partly due to retail acceptance of their emerging product categories, such as Chromebooks,” senior analyst Rajani Singh said.

IDC, of course, is not counting tablet sales as part of PC shipments, which some analysts have argued is a mistake. Including tablets, which are outselling PCs now — and are forecast to outsell PCs by a 7-to-1 margin in 2017 — Apple is still a top PC manufacturer, and still in positive growth territory.