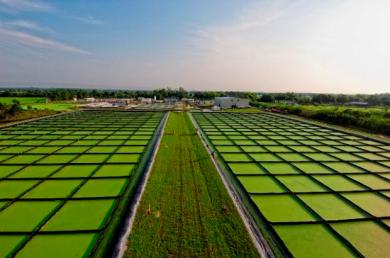 PetroAlgae, a company claiming that it has found a cheap way to convert algae into fuel — a goal that formidable competitors like Sapphire Energy and Solazyme are also chasing — just filed for a $200 million IPO despite a weak public market for green companies. Early signs suggest that this move could do more harm than good to the burgeoning algae industry.

Many analysts already agree PetroAlgae has jumped the gun. The company doesn’t have any revenue (actually zero) — but that’s not the biggest concern. Most of the cleantech companies filing to go public don’t have any plans to escape the red anytime soon. Rather, the general consensus is that the algae market simply isn’t mature enough yet.

There are literally hundreds of companies chasing the dream of using algae in some way to produce car and jet fuels, not to mention chemicals for consumer products. But only a small handful have made any money to speak of, including Solazyme, Sapphire, Synthetic Genomics and Solix. PetroAlgae is far from the top of its field. Right now, it’s little more than a lofty claim that it can churn out algae-based fuel that’s competitive with crude oil at $20 a barrel.

You can see why the rest of the algae industry might not be thrilled about PetroAlgae going first. With $58 million in losses over the last three years, it’s not exactly poised to take the market by storm. And one failed or weak IPO could turn investors against the idea of algae-to-fuel plays in general.

This is not to say that PetroAlgae doesn’t have any good ideas. Its core technology actually sounds pretty compelling. The company spun out of incubation center XL Group with plans to grow algae in sealed bags of water supplied with carbon dioxide and sunlight. It says this method should allow it to produce 10,000 to 14,000 gallons of fuel per acre, more than double the industry standard.

Instead of generating barrels upon barrels of green fuel, PetroAlgae says it will license its technology to other companies, particularly the oil giants. According to its S-1 filing, it has memoranda of understanding with five of these potential partners, but doesn’t name a single one. Its plan is to collect a licensing fee for the first three years of a 20-year license and collect royalty fees over the course of the license. For now, all it has to show for itself is a small-scale demonstration plant in Florida.

But even if it eventually delivers on its ambitious promises, PetroAlgae doesn’t seem to be the most organized of companies. As Earth2Tech points out, it is actually a holding company that is loosely affiliated with another holding company called PetroTech. If it actually makes it through its IPO, these two entities will merge into a single company called NewCo.

Even fairly successful companies like biofuel maker Codexis and solar cell maker JinkoSolar have had weak IPOs so far this year, raising much less than expected. And both Trony Solar and cylindrical solar module company Solyndra had to yank their filings due to poor market conditions. Given their fates, PetroAlgae seems doomed. Venture capitalists already aren’t wild about capital-intensive algae-to-fuel investments. A poor performance on the company’s part could very easily doom its peers too.