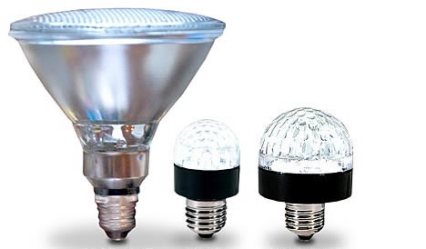 Just a week after General Electric unveiled its light-emitting diode bulb capable of replacing 40-watt incandescents, Philips has already one-upped it, announcing that it will start selling an LED equivalent of 60-watt incandescents by the end of the year.

Philips may be the biggest lighting manufacturer in the world, but don’t count General Electric out quite yet. The latter claims that its 9-watt bulb has a lifespan of 17 years — meaning it could literally light your child’s bedroom from birth until he or she goes off to college. The Philips bulb, which runs on 12-watts, has a shorter lifespan.

As federal regulations move in the direction of outlawing wasteful incandescent bulbs completely, LEDs will undoubtedly become more popular. They last longer and save much more energy than the current substitute, compact fluorescent bulbs. The only real hurdle left — and it’s a high one — is price.

Philips didn’t disclose a price tag for its new bulb in today’s announcement. But it’s hard to imagine that it will come in much under GE’s $40 to $50 forecast. Panasonic, which is also prepping to release a 60-watt equivalent LED bulb, has pegged it at $50 to $60. This is more than five times higher than most consumers are willing to pay for light bulbs.

That’s the reason venture-backed Bridgelux, the David among Goliaths in the LED market, is going after the commercial market with its interchangeable LED bulb, the Heleion. The company’s CEO, Bill Watkins, argues that companies are much more likely to use LEDs for general lighting because they precisely calculate how much money is being saved on energy. Homeowners are more resistant to steep upfront costs than they are interested in long-term savings.

Philips is hoping to sweeten the deal for its customers with several other features. In addition to emitting a warm white light, as opposed to the bluish glow LEDs used to be known for, the new bulb is dimmable. The company is also hard at work on future offerings that could justify higher prices, including a lighting system tailored for homes called LivingAmbiance that would come with thousands of different settings like color variation.

Philips is also looking to cushion its consumer bulb business with street-lighting revenue from municipalities. Later this year, it plans to debut long-lasting LEDs for this application, which could generate millions in bulk orders.