This article is part of a series of posts where we write about DEMO alumni, and the news about their progress. PhotoRocket launched at DEMO in Spring 2011. Check out their video here and more at DEMO. 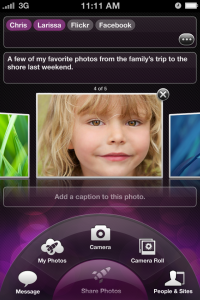 Photo-sharing apps are flourishing in the age of the 5+ megapixel smartphone camera. To stand out, though, an app needs a unique angle. PhotoRocket‘s appeal is what its designers call “radical simplicity.” Last week, PhotoRocket strenghtned its hand by adding a feature that allows consecutive photo shooting unfettered by the calls to edit or share that are common in popular rivals like Instagram.

The app, which launched at the DEMO conference in Spring 2011, is not alone in this development. Apps like Hipstagram also allow uninterrupted photo taking. But PhotoRocket’s edge is to let users share bulk photos to a number of outlets (Facebook, Flickr, email, etc.) at once.

In practice, PhotoRocket’s camera function is mind numbingly easy. After you finish taking pictures in a camera roll, just click done. You can also switch the iPhone camera to its outward or inward facing positions, turn flash on and off and view a film strip of previously taken photos. The only drawback is the roughly 2-3 second wait time between photos.

PhotoRocket is particularly convenient for the average event-goer. Take yesterday’s gay pride parades. Most shutterbugs don’t want to do deep editing on the spot, a feature not available on PhotoRocket, but the app saves them the task of arduously locating and individually uploading photos via, say, the Facebook app and then repeating the process for e-mail. PhotoRocket allows you to shoot all of your pictures in- 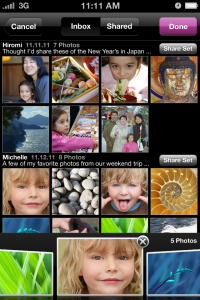 app and consolidate them onto a roll to be shared. If you’re like me, that means 200 photos uploaded to your social community and sent to your chosen contacts all at once. (You still have to be careful about sharing shots so colorful they violate terms of service.)

When asked about competitors, Anna Collins, a Microsoft veteran who recently joined PhotoRocket as president, gave an interesting answer. “When it comes to sharing photos, six to seven out of ten times, consumers use e-mail. We consider ourselves a competitor with e-mail.”

That’s one tough competitor. Because in essence, PhotoRocket is competing with habit. People are used to receiving attachments. PhotoRocket, however, gives you the ability to send hundreds of photos to an e-mail address sans attachments and sans login. One of its main value adds, Collins says, is the focus on user and receiver experience. The app has what Collins calls the, “Grandma factor.” Easy for you to share, easy for Grandma to open.

PhotoRocket plans to release an Android app, but has no update on timing.