Picasa 3.5 is an update from Google to its photo collection software. It begs the question: If there’s anything big here, why isn’t it 4.0?

Name Tags are the feature Google wants you to notice this time. It seems dumb, but there’s a hook. Picasa wants to become your de facto address book. You’ll have to prime the pump by tagging individual people in your photo collection. But as shown here, it can pull photos of your friends from your photo collection, by matching their faces using that technology Google either developed or acquired. 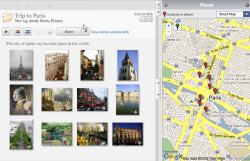 Picasa has also incorporated geotagging; previously users had to install Google Maps to do the mapping. That’s built into Picasa now.

Other features seem designed to drag users back from Twitter, or wherever it is they’ve gone in the past year since Picasa 3.0 was released.

The 3.5 nomenclature makes me suspect — no, actually the 3.5 makes it blindingly obvious — that Picasa 4.0 is in the works, and probably overdue.