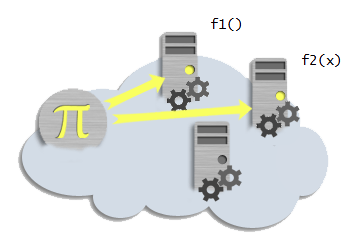 Even though there are a number of services that help companies take advantage of cloud computing infrastructure, a new startup called PiCloud says it can make things easier still.

Cofounder and chief executive Ken Elkabany said the difference between PiCloud and cloud services from companies like Amazon and RightScale is that existing services may make things easier, but companies still need to get involved in managing and booting up their servers as needed. PiCloud says it handles all of that management. For non-IT folks who want to access more computing power, the cloud becomes an invisible resource that is accessible at-will.

Elkabany said the PiCloud team was originally focused on an app that analyzed photos on social networks. It built the cloud tools to power that app, then realized those cloud services made for a more compelling business. To illustrate the concept, Elkabany showed me a photo-analyzing app that would normally run on his own computer. By just tweaking a few lines of code, the application can leverage PiCloud to run on Amazon’s infrastructure.

The closest comparison to PiCloud might be Heroku, a startup that automatically deploys applications built using the Ruby on Rails format. The difference is that Heroku focuses on web apps, while PiCloud wants to power the computation needed by science and businesses, for example in the medical, biomedical, and financial industries. That’s why PiCloud started with the Python language, not Ruby, and has plans to support Java and .Net soon.

The Sunnyvale, Calif. company is opening to the public today, after signing up 1,500 users for its private beta test. So far, its only funding is a $35,000 grant from Lightspeed Venture Partners, but Elkabany said it may try to raise more money soon.