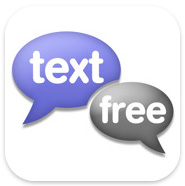 Did you know you can use your iPod Touch as a free SMS text machine? Or that you can skip the texting charges on your iPhone plan?

If you’ve got a WiFi network, you’re in. Textfree, an app launched nine months ago by startup Pinger, has already delivered over a billion text messages to and from Apple handset users.

CEO Greg Woock — pronounced “woke,” it’s Dutch — a veteran of Handspring, told me on Tuesday that Textfree is already several hundred million messages past the 1,000,000,000 mark. Do the math: Pinger is serving somewhere between one and 10 million text messages per day. Closer to ten. 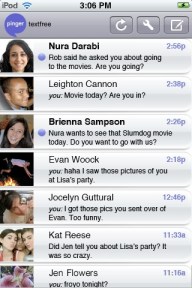 The company has more announcements coming soon, but for now it’s enough to note that Pinger has placed 14 iPhone apps into the Top 100 on the iTunes store, 15 million downloads in all. Doodle Buddy, Slime Ball Lite, and Fat-a-pult Lite are the best known. In December, Pinger had 10 apps in the top 100 at the same time.

But Textfree, which placed two versions in Apple’s Top 10 list at one point, is the app with legs. Its user retention rate breaks the gone-in-30-days model of game apps and novelty apps. Once people start texting, Woock said, they tend to use the app more and more, not less and less.

Users can choose Textfree Lite, which limits itself to sending 15 messages per day for free. Or they can pay a measly $5.99 per year for regular Textfree with unlimited texting.

Pinger, founded in 2005, has secured a total of $11 million in funding in two rounds in 2005 and 2006, mostly from superstar lenders Kleiner Perkins Caufield & Byers. Since then, Pinger has become cash flow positive by keeping iTunes stocked with a stream of new apps. In the near future, we’ll have more news about this App Store success story.