Home and garden, arts and crafts, style and fashion: These are the categories that everyone knows already dominate the red-hot digital pin-board site Pinterest. But the people of Pinterest, according to new data, are less cookie-cutter and more cookie-maker.

In fact, food is the fastest-growing and most viral category on Pinterest, according to e-commerce analytics platform RJMetrics.

The still private-beta Pinterest is where 10 million members, typically branded as arts and crafts enthusiasts, “pin” and “re-pin” (share) products, photos, recipes, clothes, and so forth, usually from other websites. It’s an image-centric site, where pinned images appear on shared collections called boards. Launched in 2010, the social network for pinning has catapulted to a top 10 social site and could be worth as much $500 million. 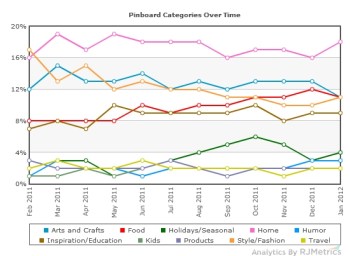 To better understand the content people are pinning on Pinterest, RJMetrics looked at roughly one million pins spread across thousands of pin-boards from 9,200 different users. As expected, the most popular board categories are home (17.2 percent of boards fall into the home category), arts and crafts (12.4 percent), and style and fashion (11.7 percent). But the analytics company has found one rather unexpected trend: food-related pinning is quickly taking hold of the site.

Accounting for 10.5 percent of boards, food is the fourth most popular category on Pinterest. The food category has climbed the charts over the past year and, when it comes to new boards, is now more popular than the fashion category. Content in the food category is also the most likely to be repinned. Food generates, on average, 50 percent more re-pins than the number two most repinned category, style and fashion. 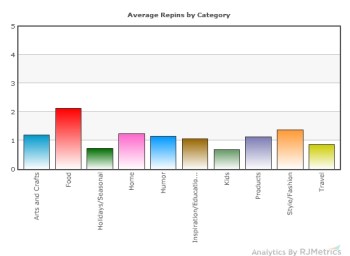 “I think [this is] reflective of Pinterest picking up a more mass-market user base,” RJMetrics founder and CEO Robert Moore told VentureBeat. “The site started out with a strong following among style and fashion enthusiasts, but that market is only so large. As more of the general population flocks to the site, it’s only natural that more broadly applicable categories (like food) rise to the top.”

Interestingly enough, the products category, while representing just 2.1 percent of boards, is the most likely category to be liked. The propensity for members to publicly pass along their approbation for products should bode well for the young startup as it stabs at commercialization tactics moving forward, RJMetrics concluded.