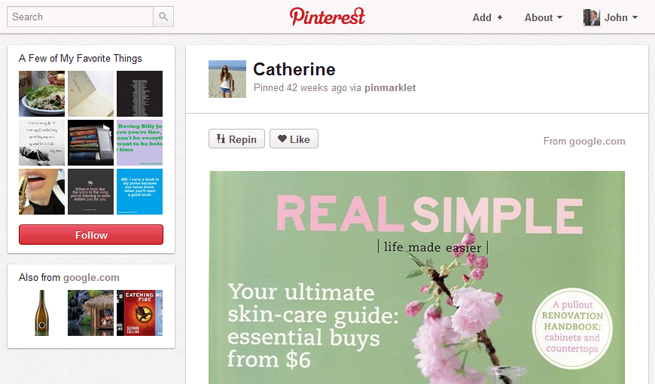 Social media professionals have spent the last few months trying to incorporate Pinterest into their strategies. We are just starting to figure out the best ways to do it, and calculate if it’s worth all the trouble. In some cases, it’s not.

If you’ve somehow missed the barrage of coverage, Pinterest is a social media site where people can create “boards,” on which they pin pictures they find online, similar to a scrapbook in real life. The various pictures (which usually link back to a site) are often compelling in nature, such as delicious-looking food, stylish clothing, or beautiful scenery. They spread virally through the network when other users “re-pin” them.

When a social media tool first takes off, early adopters wonder if it will be able to attract new users and customers, or whether it is just a passing fad. To find an answer, social media professionals vet new services through the creation, destruction, reconstruction, and perfection of best practices designed to drive traffic. The results are usually measured in page views, ad impressions, repeat visitors, or purchases.

So far, we’ve figured out the following basic “best practices” for driving traffic to your company, brand or site using Pinterest.

Become an active member of the community

Rule number one is to actually use Pinterest like a real user would. As with other traffic driving sites, like Digg and StumbleUpon, promoting just yourself will backfire and your posts won’t get traction.

Use Pinterest to post pictures that you find pretty, useful, or in the case of food, mouth-watering. Consistently use the site every day. Just showing up every once in a while with limited interaction is no way to build a following or develop relationships on the site. How are you supposed to determine whether or not Pinterest can increase your customer base if you don’t engage the site?

This type of approach should be common sense, but you’d be surprised how many marketers stand out like an undercover cop in high school.

If you see someone pinning something you like a lot, “re-pinn” it — meaning re-share it. If people “like” your pins and boards and “re-pinn” your images, do the same back for them to build good will.  Re-pinning is similar to a “re-blog” on Tumblr, a retweet on Twitter, or a share on Facebook. Consistently interacting with folks this way is directly related to whether or not you develop meaningful relationships online.

Identify people and brands that have similar interests to you and watch them over time. Then, gradually engage them and interact with them, even promoting their posts through re-pinning, in the hopes that they might eventually notice the things you post and “re-pin” you as well. Follow these people on Facebook or befriend them on Facebook. Get to know them and talk to them. This is the heart of social media, and should come naturally. If you don’t want to make friends with people, maybe this type of job isn’t for you.

Pin a variety of items and create a wide-selection of boards. Mix in the content you wish to promote among the various items you are pinning to your boards. Over time, this traffic can build upon itself as new people find you, check out your pins, and click trough to your site. You can also attempt to bring extra traffic to images of your products on your site or blog by placing a “pin it” button near your photos.

Yes, Pinterest is hot and the “It” social network of the moment, but it’s not for everyone. Do you run an online men’s lifestyle magazine, replete with pictures of scantily clad beautiful women and sports articles? It will be rough going on Pinterest for you. Don’t expect a lot of traction, at least not yet. There’s been a lot of talk about how the vast majority of people using the site are women, but that may not last forever. More and more men are signing up every day. Will we someday see just as many boards showing the best in men’s fashion as we do for women? Not anytime soon, I’m afraid.

The verdict is still out on whether Pinterest truly sends meaningful traffic to web sites. In recent weeks and months, an avalanche of articles have appeared about Pinterest. One report claims the site can now bring more traffic than Google+, Linkedin, and others combined. I spoke with one online marketing exec at a clothing company who said Pinterest has rapidly moved into the same territory, referral-wise, as Tumblr and Facebook for her company’s site. These anecdotes are noteworthy but they remain few and far between at the moment. Hard information is scarce and most folks are at the very nascent stages of determining just how many visitors the site sends. They can’t say for sure if spending time on Pinterest has truly been “worth it.”

Many digital PR professionals are lumping Pinterest in with sites that stimulate traffic sometimes, but not always. Quora and Tumblr come to mind here.

I am of the opinion that all of these sites have potential to drive traffic. It is simply a matter of whether or not you have the time to invest in testing a site for traffic generation purposes, and whether you find that the time spent at the site is worth whatever traffic you are able wring from it.

John is a writer and social media consultant who has worked at Village Voice Media and NBC. He is now Vice President of Business Development at Hasai Inc.