Over the past few months, there has been a lot of hype surrounding Windows 10, in part because Microsoft is offering free Windows 10 upgrades to those running Windows 7, Windows 8.1, and Windows Phone 8.1. In March, reports suggested the offer would extend to pirates, though when we followed up with Microsoft, it turned out the Windows licenses would stay non-genuine and would be unsupported. In May, the company reaffirmed this stance, but today we’re learning that pirates are successfully upgrading to Windows 10 for free.

Over on these two Reddit threads in the subreddit Piracy, both Windows 7 and Windows 8.1 users are reporting they have managed to successfully upgrade their pirated copy of Microsoft’s operating system to the latest and greatest. That part isn’t a huge surprise — Microsoft did say pirates would be able to get Windows 10 — but the fact that Windows 10 is showing as “activated” is eyebrow-raising: 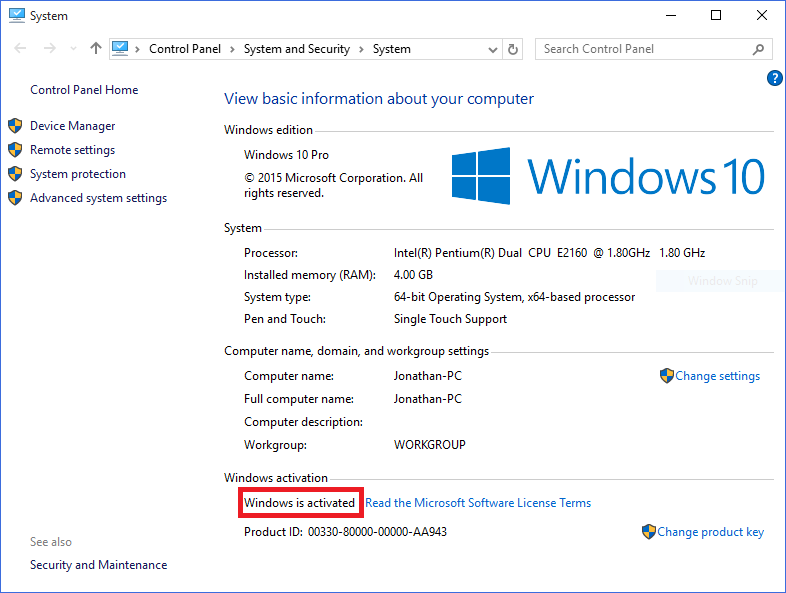 To be clear, these users are claiming all they did was run the “Get Windows 10” app. They are not running cracks after the upgrade (although some are perfectly happy to take that route instead). This would imply that whatever crack these pirates used to trick Windows 7 and Windows 8.1 into becoming activated worked well enough that Microsoft’s own checks didn’t catch it, and gave the green light to get Windows 10 for free.

Just like genuine users, these pirates are even getting new Windows 10 product keys, in case they want to do a fresh install. They can use every feature, run Windows Update without any issue, and overall get the full Windows 10 experience for free just like any Windows 7 or Windows 8.1 user.

When Microsoft revealed that Windows 10 would have seven editions, the company also disclosed that the free upgrades for genuine users were to Windows 10 Home, Windows 10 Pro, and Windows 10 Mobile. On the same day that Windows 10 launched for PCs, it looks like pirates have already managed to figure out how to get the first two without paying a dime and without having to crack Windows 10.

In short, this was not supposed to happen. Pirates were supposed to be able to upgrade to Windows 10, yes, but the expectation was that they would be prompted to pay and activate — indeed, some users are experiencing just that. This would suggest that the workaround depends on the crack that was used on Windows 7 or Windows 8.1.

We have contacted Microsoft for more information and will update you if we hear back.

Update: We’ve confirmed with a source close to Microsoft that devices which the company detects as non-genuine will not be offered the free upgrade to Windows 10. The company also gave us a generic boilerplate statement.