Most web users are used to tagging photos on sites like Flickr and Facebook. But now Pixazza Inc., a new venture backed ad company, has released a tool that turns items in web images into clickable and purchasable content. Put simply, it’s like Google’s AdSense — except it sources website images to deliver ads instead of text.

Although the backend is a little complicated, Pixazza’s user interface is intuitive. Once a webmaster integrates the tool into their publishing system, visitors to the site can simply move their mouse over the images to reveal additional information about the products within a pop-up tab. Clicking on the text in the tab takes users to an individual product pages where they can glean even more info, or even purchase the item from one of Pixazza’s participating vendors. Although Pixazza has launched with fashion and apparel merchants in mind, the company says it plans to quickly branch into electronics, travel, and home furnishing merchants too.

Under the hood, Pixazza uses a proprietary platform (and enlists an army of product experts) to identify taggable items and connect them to similar products carried by its network of merchants. The reliance on crowdsourced identification (versus a traditional alogrithm) is ultimately what sets Pixazza apart from traditional shopping destination sites like Shop.com and Like.com. Ideally, this produces much more accurate results for a shopper wanting to snag — say, the same zipper hoodie they saw Jake Gyllenhaal wearing on their favorite celebrity gossip blog — than if they went it alone with a traditional search engine.

However, the real question lies in the strength of Pixazza’s stable of online merchants. In its current incarnation, the tool seems incredibly useful for exploring items within web photos, but it may prove problematic if shoppers aren’t able to get the best deal from Pixazza’s preferred merchants

A recent Pixazza-infused image search on participating site Imnotobsessed revealed products from Overstock, Zappos, and Hot Topic. Although these aren’t the worst options, two-thirds of them aren’t sites that I’d normally bother with (price-wise) during an ecommerce shopping spree. This doesn’t necessarily damn Pixazza’s new tool, but it does reveal how its success may lie in the strength of its partnerships.

Pixazza is also announcing a $5.75 million first round of funding from August Capital, CMEA Capital, and Google. 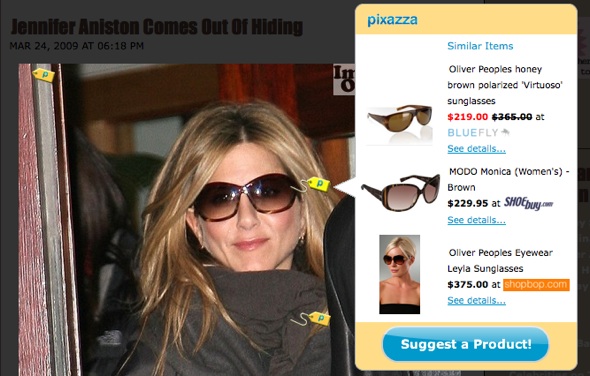