Google kicked off its hardware event this morning with a slew of smartphone and smart display announcements, but it didn’t leave tablet enthusiasts in the room hanging. The Mountain View company today debuted the Pixel Slate, a “midnight blue” tablet running Chrome OS. And we took it for a brief test drive.

First impressions: It has quite a footprint. The Slate’s 3:2 aspect ratio screen measures 12.3 inches across, and the whole thing — screen, enclosure, and all — clocks in at 1.6 pounds. You’ll be able to just about fit it in a backpack or briefcase, but anything smaller would definitely be a stretch.

That screen looks pretty darn good, though. It’s what Google calls a “Molecular Display,” a low-temperature polycrystalline silicon (LTPS) 3,000 x 2,000 resolution LCD with faster response times and brighter colors than conventional panels. It seemed vibrant and sharp to my eyes, but the demo area’s tall windows didn’t do it any favors. We’ll have to save in-depth testing for more neutral lighting. 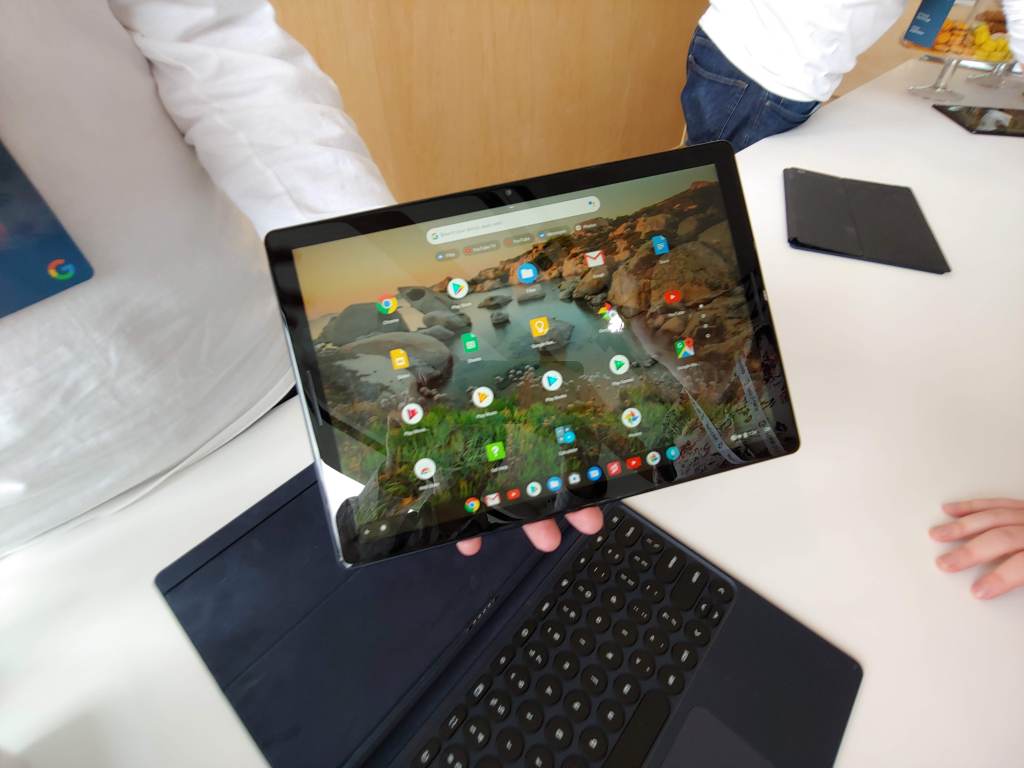 As someone who has used Microsoft Surface Pro, it didn’t take long for the Pixel Slate’s form factor to grow on me. It’s got bezels thick enough to grip in portrait or landscape orientation and a combination power button and fingerprint sensor in the top-left corner that supports Chrome OS’ biometric authentication features.

There are two cameras on tap: an 8-megapixel sensor with a f/1.9 aperture and 1.4μm pixel size, with a wide field of view and 1080p/30fps recording; and an 8-megapixel Sony Exmor RS-class IMX355 sensor with a f/1.8 aperture and larger 1.12μm pixel size. Both can take advantage of the Google Camera, Google’s AI-embued photography app that enables features like portrait mode, which blurs the background in photos while keeping the foreground in focus

Also of note are the dual front-firing speakers, two USB Type-C ports, and a Titan Security chip — the same chip inside the Pixel 3 and Pixel 3 XL — that enables things like verified boot and storage of “encrypted approximations” of fingerprints in an offline, discrete processing unit.

The exact processor, memory, and storage mix will depend on the model. At launch, you’ve got four flavors to choose from:

Then there‘s the Pixel Slate Keyboard, a detachable case with circular backlit keys (including dedicated Assistant and control panel keys in the top row). It doesn’t draw power from the tablet’s battery — Google pegs the Slate’s battery life at about 12 hours of mixed use — and it feels fantastic to type on. Compared to my handy Microsoft Surface Touch Cover, the key travel is noticeably less shallow, and there’s less resistance. I’m a mechanical keyboard devotee, but I wouldn’t mind swapping it for the Pixel Slate Keyboard now and again. 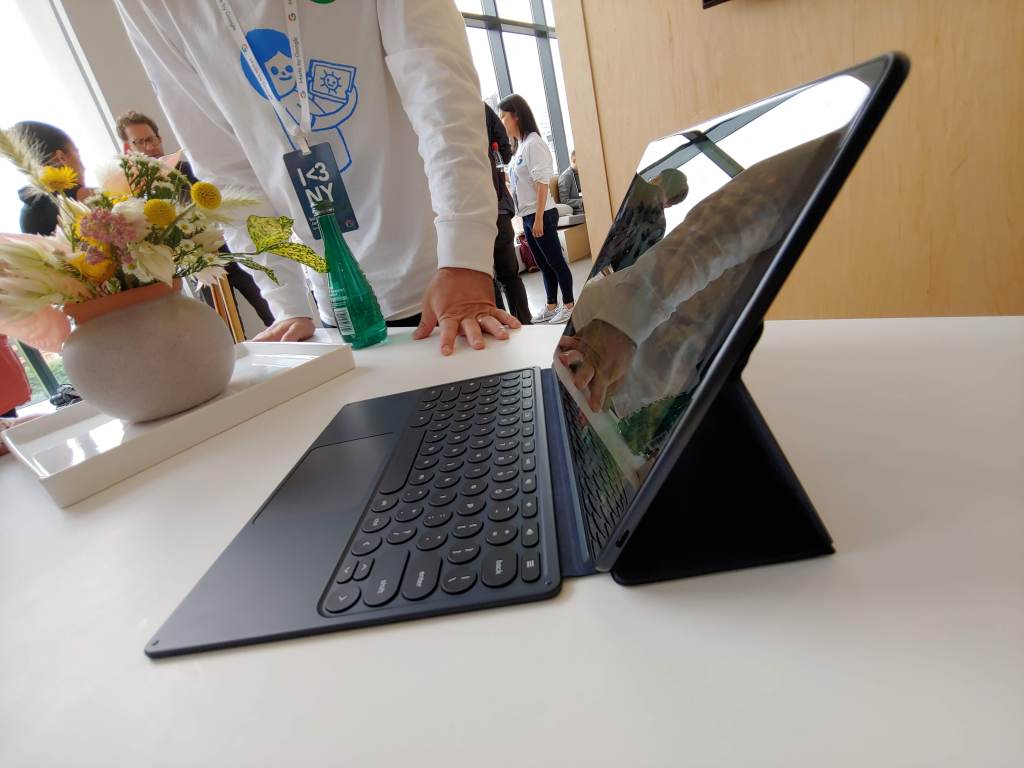 Among the Pixel Slate Keyboard’s other cool tricks are an adjustable hinge (Google calls it “the folio”) that can lock it in the angle of your choosing and a “hushed key” design that dampens typing noises.

What about the Pixel Slate’s software? It’s Chrome OS through and through, right down to the ability to install Linux distros and Android apps from the Play Store, the latter of which make great use of the Pixel Slate’s touchscreen, which has been spruced up to improve the touch experience.

The launcher bears the most obvious changes. When the Pixel Slate is detached from the Pixel Slate Keyboard, installed apps surface in a large, scrollable list of shortcuts. (It switches back to Chrome OS’ desktop UI when it detects a mouse or trackpad.) There’s a search bar on top, and beneath is a list of app recommendations informed by the same contextual AI built into Android Pie. 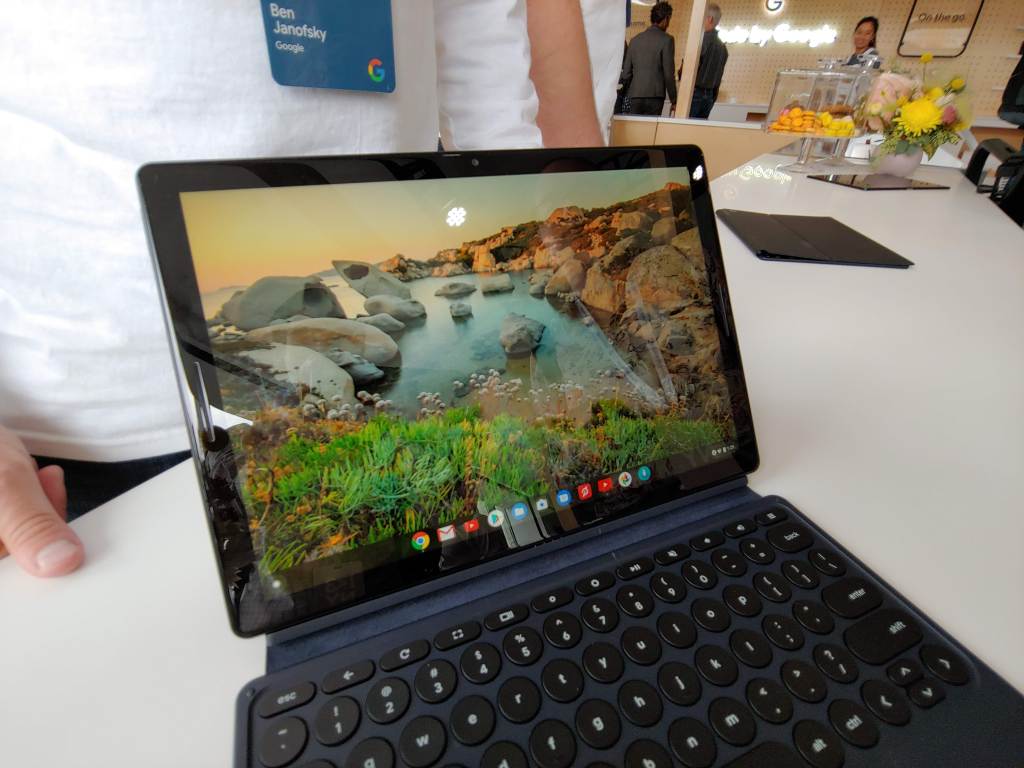 In the bottom-right corner of the screen is the redesigned settings menu, which has larger buttons that are easier to tap with a finger (and more forgiving if you miss the touch targets). The Google Assistant — Google’s omniscient voice intelligence — is present and accounted for and made easily reachable from a small tab near the bottom-center of the taskbar. Finally, it includes a Pixel Slate-optimized version of Adobe Acrobat, which I didn’t get a chance to test.

There’s a lot to unpack with the Pixel Slate, needless to say. It’s a compelling foray into the world of convertibles, but it’s going up against a juggernaut — Microsoft’s Surface series. It remains to be seen whether Google can convince would-be Surface buyers of the merits of Chrome OS, especially considering the Slate starts at $599 without the $199 Pixel Slate Keyboard and $99 Pixelbook Pen stylus.

The Pixel Slate is available for preorder starting today and comes bundled with a USB-C adapter and three free months of YouTube Premium.