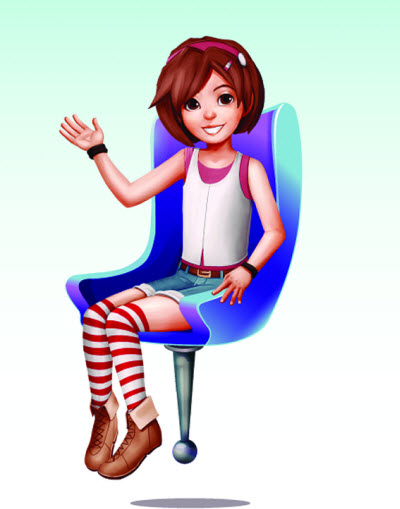 PixyKids has raised $3 million to develop its social platform for kids ages six to 12. It is built on the idea that kids want to socialize, even though they’re too young for Facebook.

Kids can join PixyKids under their parents’ supervision and can share experiences and pictures the way that adults do on Facebook. The company is betting that social networks, not virtual worlds or education sites, will resonate most with kids.

In PixyKids, children can create their own 3D avatars (resembling the 2D avatar pictured) and create other content with interactive tools and apps. They can connect and share with family and friends and build and publish a curated digital portfolio, in an uninhibited yet safe manner, chief executive Rajul Kadakia told VentureBeat.

“It’s a cross between Facebook and Disney,” Kadakia said. “We take what Facebook stands for, such as user-generated content, the platform, the social networking, and engaging apps. And we combine that with Disney-like engaging experiences and family friendly content.”

Kadakia, a mother of two, co-founded the company in December 2010. Prior to PixyKids, Kadakia founded a gift products company, Designs by Rajul, which created hand-made memory albums for online and retail stores. She decided to take that idea online and focus on kids; she believed so strongly in the idea that she moved from the land of outdoor shopping malls to Silicon Valley, relocating from Newport Beach to Menlo Park, Calif.

Adair, a father of three, helped Google make acquisitions such as YouTube and DoubleClick. He liked Kadakia’s idea because his daughter had made more than 100 singing videos that he would love to be able to share easily with grandparents and friends without putting them on YouTube for the world to see.

Kadakia felt that educational sites were favored by parents, but not kids, and virtual worlds were fun for kids but hated by parents. Facebook limits its users to 13 and above; it has something like 7.5 million illegal child users and is deactivating accounts at a rate of 20,000 a day.

“We play in the space that can be enjoyed by both kids and parents,” Kadakia said. “We have 3D avatars. We have customizable options. We have sticky pre-patterns. We also allow user-generated content, and kids can share what they create with family.”

Children can upload photos, videos, artwork, and projects. They get their own space on the site, resembling a control panel from which they can access a community wall, text and video chat, email, and a personal URL.

Kadakia said the site protects privacy and complies with COPPA, the Children’s Online Privacy Protection Act. The company verifies that a child has a parent or guardian who can approve the child’s account. And the parent has to approve each friend the child adds. PixyKids will also patrol the site for bad behavior and naughty words.

Getting parents involved is key because the age group still embraces parents and extended family in a way that older children do not. Parents can provide the attention and positive reinforcement for the child’s accomplishments that are trumpeted on the network.

The company has added Michael Adair, a former Glam Media and Google finance veteran, as chief operating officer. Kristen Alexander, an ex-Disney marketer, is vice president of marketing; and Neil Markey, formerly of PlayFirst, is vice president of engineering. Other co-founders include Kalpesh Savla, formerly of Juniper Networks and 3Com, and Altaf Shaikh, founder of Neova Solutions. The firm has nine employees in the U.S. and 11 in India.

Competitors include virtual worlds rivals such as Club Penguin and Moshi Monsters; game sites; and other kids social networks like Everloop and Imbee. PixyKids’ platform is built on Adobe Flex.

ATA Ventures supplied $2 million of the total funding, while angels provided the rest. Pete Thomas, co-founder of ATA Ventures, said that kids have already become rapid adopters of digital technologies and want to participate in social networks and user-generated content in a way that is relevant to their daily lives.

Kadakia noted there are 30 million kids ages six to 12 in the U.S. Around the world, there are 850 million kids in that age group. Kadakia figures it’s time someone empowered them all. It’s just too bad that Kadakia’s kids are almost too old to benefit from her social media platform. They’re 10 and 12.