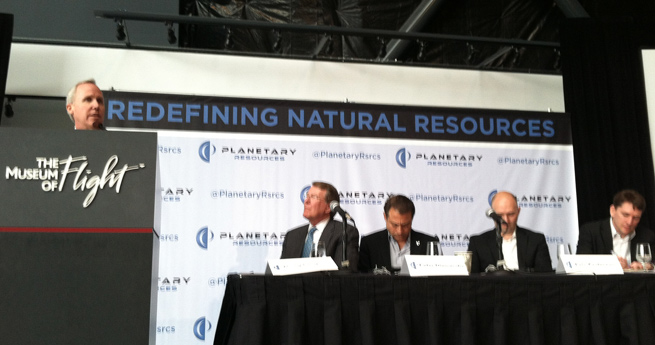 Following a few days of excited build-up, Planetary Resources, a new space startup backed by heavy hitters including Larry Page and James Cameron, officially announced its plans to mine asteroids near Earth. At the Tuesday morning event, which took place at the packed Space Gallery in the Museum of Flight in Seattle, the company said it would launch phase one of its mission within two years and use the next decade just to identify resource-rich asteroids.

Museum of Flight chief executive Doug King opened the event with a few words about how excited he was to be working with Planetary Resources and to have the project take place in Seattle: “Maybe we should start thinking of this as the Silicon Valley of space.”

The first speaker was Planetary Resources c0-founder and co-chairman Peter Diamandis, who is best known as the chief executive of the X Prize Foundation. “Since my early teenage years I wanted to be an asteroid miner,” Diamandis told the audience. “If you think about what has driven human exploration, it has really been the search for resources.” 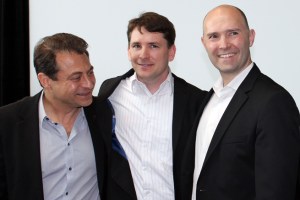 Diamandis cited the various factors that have come together to make now the right time for asteroid mining. Today’s technology allows small companies to create low-cost and powerful spacecraft, and people like Jeff Bezos, Paul Allen, and Elon Musk have shown how private teams can enter what was once the realm of governments. There is a new generation of billionaires now investing in space, such as Richard Branson, and now is when we need these people the most because resources are becoming scarce. Finally, NASA is partnering with private companies on its goal of extending humans’ presence in space.

“When I look at what Shell has done, they have created robotic cities on the bottom of the ocean. It’s extraordinary what humanity what can now do. For me, it makes going to asteroids look easy,” said Diamandis.

Eric Anderson, founder of Space Adventures, took the stage to talk about the mining plan in more technical detail. How valuable is an asteroid? What is the plan for actually mining these near-earth asteroids? These asteroids “have existed for literally billions of years and have some of the most valuable materials we will need for the future of space and for the future of earth,” said Anderson.

The company wants to access two types of resources: water and platinum metals.

Water and its constituent elements, hydrogen and oxygen, are “the best rocket fuel out there.” They would be able to supply NASA exploration missions, fuel private exploration missions, boost satellites, fuel space stations, support private colonization efforts, and fuel tugs that could be used to clean up space debris.

Above: The Arkyd 101 telescope in person (top) and in mocked-up artwork from Planetary Resources (bottom).

Platinum metals on Earth are found in spots where asteroids have struck our planet. While the water will fuel the in-space economy, the metals will be brought back to earth, according to Anderson.

The spacecraft that will make this sci-fi dream a reality is called the Arkyd line, which is being developed in phases, starting with the 100 series. These will act as specialized telescopes to prospect and identify the right asteroids. Later versions will be used to extract the resources.

The second phase of the venture is prospecting, which will involve “swarming” the potential asteroids with telescopes and spacecraft to find the right marks. “There are 8,931 near-Earth asteroids we know of. This represents one percent of the near-Earth asteroids that are larger than 50 meters,” said Anderson.

The third phase is going to be deciding what to do next and exactly how to do it, including working with NASA to decide what the top targets are. “By that time, we’re going to ask, ‘Does NASA need gas stations?'”

Anderson thanked the investors behind the project and closed with a few reassuring words about the potential for a large windfall in the future: “We’re going to create depots and gas stations that open the roadway to the rest of the solar system … we can use these asteroids to grow our prosperity for the future.”

Planetary Resources’ president and chief engineer, Chris Lewicki, discussed the technology, the spacecraft, and the people on his team. He gave a few details about the series of custom space telescopes the company will be using to identify resource rich asteroids, starting with the 100 series, which he described as a personal space telescope. The 300 series will be used later in the process for direct targeting.

In one of the event’s most touching moments, Lewicki thanked the people who helped make the project happen. “We’re building a new kind of company, a new kind of spacecraft team,” said Lewicki, who visibly choked up while talking about the staff, investors, and advisers on the project. His eyes welled up as he mentioned all the recent excitement about the company in the press.

Tom Jones came to the podium to introduce the audience to the different types asteroids. Jones, a planetary scientist and former NASA astronaut, is an advisor to Planetary Resources. One asteroid he focused on is the size of Seattle. The company will find the right types of asteroids by looking at the color of their reflected light.

A special guest made an appearance over the phone from Texas: Ross Perot Jr., who has an extensive history of flying, in addition to his more well-known business successes. Perot is an investor in Planetary Resources.

“I’m a big believer in private space,” said Perot, who was excited to tell his children and nephews about his involvement with the undertaking. “They said ‘Uncle Ross is pretty cool’ … I was shocked at how quickly the younger generation picked up on it.”

Finally, another investor, Charles Simonyi, touched on the financial angle, including a shout out to cautionary tale Pets.com. Simonyi is Chairman of Intentional Software Corporation. He discussed having looked at the “astronomical numbers” involved with supporting humans in space, and saw that it was the mass of the materials being shipped to space that mattered, not what the material actually was. Water costs the same to ship to space as expensive photographic equipment. Being able to access water in space would change everything.

During a closing question and answer session, Lewicki had a few more details about the Arkyd line, calling it a “Swiss Army knife in terms of what it can do. … I want something that we can communicate with, gather data with.” Engineers are using some commercial technology in the development of the spacecraft, the first versions of which can also be turned into Earth-observing satellites.

“We can’t just build one precious tool that we treat with kid gloves. We need to make something on an assembly line,” said Lewicki.

Eric Anderson said the company wanted to avoid giving out specific timelines for the company, though Diamandis did say they wanted to have small teams moving rapidly, and propulsion with the 200 series will be the focus after the first two years. The prospecting phase, which will come after the 100 series is launched, could take years. Anderson said the company wants to identify the asteroids it will target within the next decade. The first resource the company will focus on is water, which Anderson calls a gateway material: “When there’s water sourced, other resources are essentially free because you can use fuel derived from water.”

The company says it is cash-flow positive, but declined to go into much detail as to where the money is coming from other than saying it does currently have a contract with NASA. It also mentioned — in vague terms — that it has relationships with several companies and has several customers already.

When asked about specifics after the event, a spokesperson would only say that the company isn’t looking for more capital at this time, that it cannot say who or what the largest single investor is, and that the only partner it will name is NASA.

When asked why the company was only coming out of stealth mode now after three years, Anderson said, “We’ve been fortunate to complete our fundraising rounds, we don’t talk about what those numbers are. We are also hiring now. Also, we want to share the passion and start to share the enthusiasm of these audacious goals.”

The company was founded in 2009 by co-founders Eric Anderson and Peter Diamandis. It is based in Bellevue, Wash., and currently has about two dozen engineers on staff. The equipment will be built in the Seattle area, but the spacecraft could launch from a variety of locations using “ride-share” opportunities — hitching a ride on other spacecraft already headed into space.