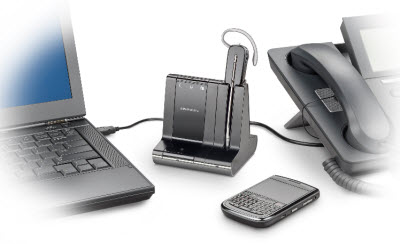 Handing off a call between a mobile phone and a land line is a pretty big pain for mobile workers. When you get home from a car trip, you have to tell your caller to dial you on your land line.

But Plantronics has figured a way to get around that problem. Today, the company is marking its 50th anniversary by introducing a series of communications headsets, including one that solves the above-mentioned problem with a smart way to hand off calls.

The Savi 700 series is a headset that allows a users to manage calls coming in from a PC (such as a voice-over-internet protocol call) a desk phone or a mobile phone. You can wear the headset that works with an Intellistand, (short for intelligent stand), talking wirelessly via a DECT land-line phone with a 300-foot wireless range. You can use the same headset to connect via Bluetooth to a mobile phone. You can seamlessly switch between all three types of calls as needed.

The new offerings include the Savi 700 series, the Savi 440, Blackwire 435, and the CS500 series. They’re aimed at marrying smart technology with elegant design.

Plantronics is releasing its unified communications tool kit, which helps tie together phone platforms based on Avaya, Cisco, Microsoft and IBM designs. The Savi 700 series is priced from $379 to $399, depending on the style of headset. It will be available in June.

Plantronics has 3,000 employees. Its rivals include GN.