Google said the Google Play Store was coming to Chrome OS, and now it’s finally here — in the developer channel of Chrome OS 53. (Eventually it will come to the beta and stable channels.) I’ve been playing with it today, and let me tell you, it’s liberating.

I should say up front that not every app will work perfectly on this early public release. Apps like Airbnb, Instagram, Lyft, Periscope, Postmates, Sprig, Uber, Waze, and WhatsApp can’t even be downloaded through the Play Store onto the touch-friendly 2015 Asus Chromebook Flip that I’m using at the moment. Apps like SoundCloud and YouTube couldn’t stream content, and I couldn’t do a video call on Hangouts. And you can’t adjust app window sizes to make them exactly how you want.

But over time these problems could be solved.

And there’s plenty that does work right now.

I successfully opened up and used Snapchat, which until now, really, has been mobile-only. 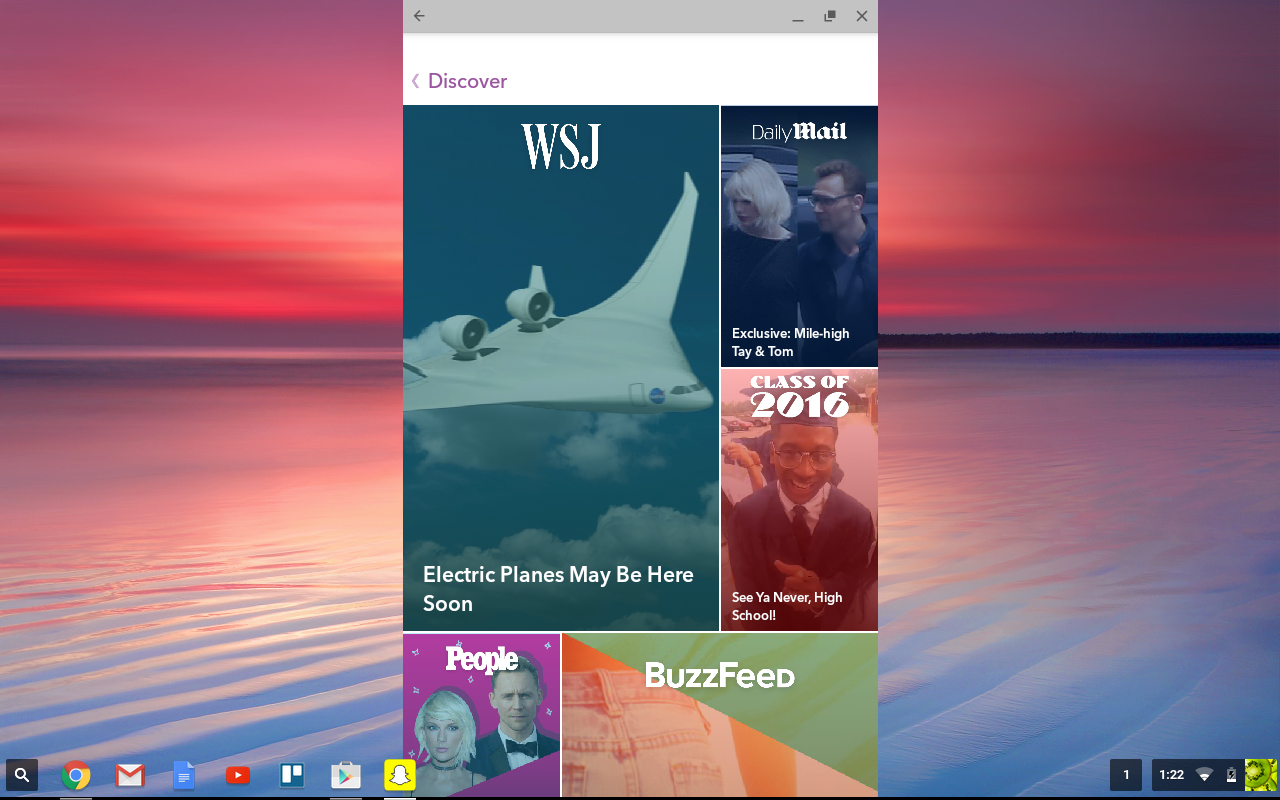 Above: Snapchat is hereby now on desktop, thanks to the Play Store coming to Chromebook.

I had a video call with VentureBeat editor in chief Blaise Zerega, and it worked perfectly. This is important because until now there was no Skype for Chrome OS, and on the web, the Skype app only supports messages, not voice or video calls. Now that constraint is gone.

I downloaded the Messenger app on the Chromebook, and guess what? That works too, for chats and video calls. Chat bubbles appear when you receive new messages — just as you would expect — although the Chrome OS task bar gets in the way of hitting the send button once you’ve typed in a message. My workaround is just to record and send voice messages.

I watched some videos on Vine. And then I recorded one.

I played Minecraft: Pocket Edition. And I played Clash Royale, with some clutch help from my colleague Dean Takahashi.

I checked out VentureBeat.com on the Mozilla Firefox, Puffin, and Brave mobile browsers. Things looked good.

I used the stock calculator app for Android. Above: Android Calculator app on Chromebook.

Slack works just fine. Although the magic sign-in link feature of the team communication app, which emails you a link to log in without having to type in your password, doesn’t work at this point.

Google Docs is now a native desktop app. I had trouble editing files, but I could view them.

Google Maps works as you would expect — again, it’s mobile, no longer just another Chrome tab. Above: Google Maps is now native on the Chromebook.

I could make simple notes with apps like Monospace, iA Writer, and even Microsoft Word.

I could listen to music in Spotify.

I could browse, edit, and download photos in Google Photos. I took a look at my calendar in the Android version of Google Calendar — which is much prettier than Google Calendar on the web. The Gmail app also has a different user interface on Android, and some may find it preferable to the regular Gmail web experience.

Some apps, including Google Calendar and Facebook Messenger, have a little arrow to the left of the minimize button. They let you toggle between portrait and landscape mode, which can be helpful. Above: Skype call with Blaise, on a Chromebook. Hi Blaise!

A few implications of this technology immediately jump to mind:

In short, you’ve got to try it for yourself. It’s so fun and surprising that it feels like a hack — but it’s actually exactly what Google wants.

To give it a whirl, just open Settings on your Chromebook, hit About Chrome OS, hit Change Channel and install the dev channel of Chrome OS 53. When you restart, you should see the Play Store icon in the shelf on the bottom of the screen.