The shooter audience on PC looks like it is in the middle of a migration from last year’s big hit to this year’s breakout success story. Nearly a quarter of all Overwatch players on PC also played PlayerUnknown’s Battlegrounds last month, according to data from intelligence firm Newzoo. And it’s finding that players are going back to Battlegrounds and leaving Blizzard’s Overwatch behind.

“In terms of crossover, fellow shooter Overwatch came out on top with 24.6 percent of its gamers playing both [Overwatch and Battlegrounds] in July,” Newzoo’s George Osborn wrote in a blog post. “Counter-Strike:Global Offensive was close behind with 20.7 percent.”

Newzoo bases these numbers on data collected from players who use the Overwolf app on PC. Over 12 million people worldwide use this overlay to add apps to games like Minecraft, Counter-Strike, and more. This is the kind of software that hardcore players would primarily use, so the data skews toward their behavior as opposed to a more casual PC audience.

But the similarity in audiences between Overwatch and Battlegrounds has led to some serious churn for the former. Churn is the industry turn for when a player leaves after at least two months of actively logging into a game.

“Overwatch was also the highest in terms of churn,” explained Osborn. “Of the people who stopped playing Overwatch in July, 25.2 percent were playing Battlegrounds. This was most pronounced in Japan where the figure was 54.7 percent. Churn from CS:GO was also high with 21.1 percent globally and 31.9 percent in the U.S.”

In April, Blizzard revealed that Overwatch has surpassed 30 million copies sold on PC and console combined. That’s a huge number, and it still has more active players than Battlegrounds, according to Newzoo. But you can see in the chart below that Battlegrounds has grown as Overwatch (and most other games on the chart) has lost players. 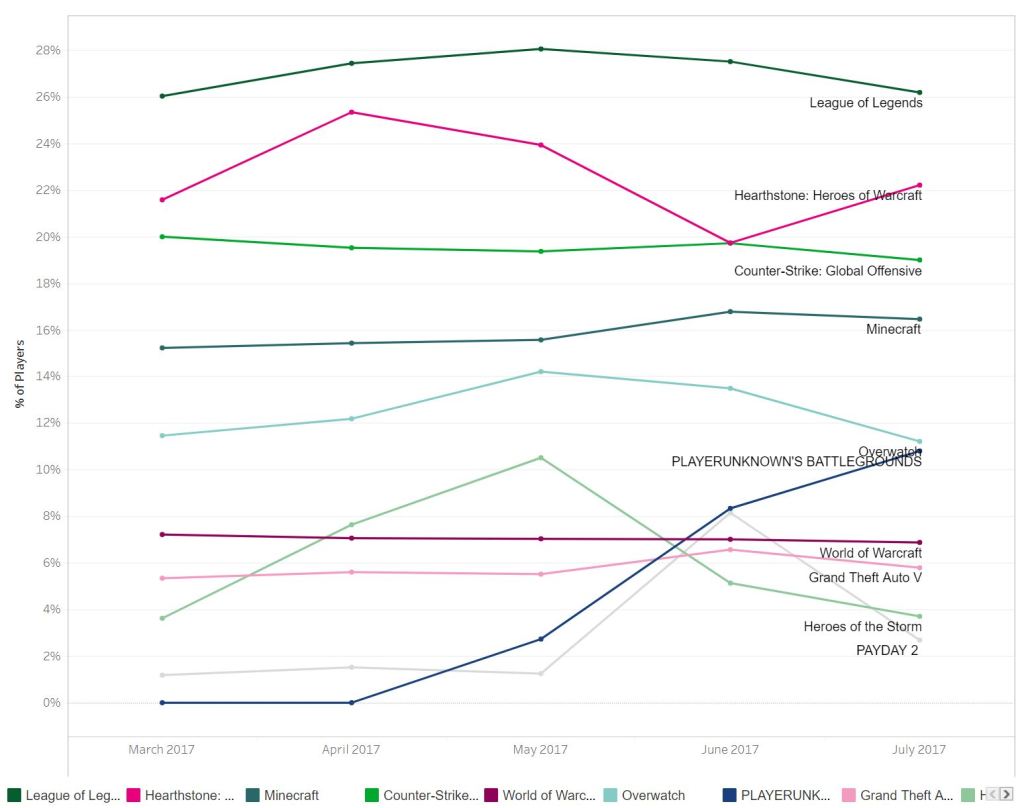 Above: Battlegrounds has the sixth largest share of worldwide PC player market, and it is looks like it could surpass Overwatch soon.

Bluehole’s shooter has only sold around 7 million copies so far. As the studio updates it and launches it into its full 1.0 retail release later this year, it will likely perform even better than it is now.