Tired of paying cash up front in order to play the most popular casual games?

Now, game publisher, PlayFirst, lets you make “micropayments” to progress through a game.

In the San Francisco company’s latest game, Diner Dash: Hometown Hero (which is the fourth in the Diner Dash series), you create an avatar, customize it to your liking, and act as a waitress and host, making customers happy in restaurant settings that get increasingly hectic to manage. This is more addictive than it sounds, and you can play with or against friends and strangers. The catch? To give your avatar the “coolest” clothes, upgrade your restaurant’s décor, and access new levels of the game, you have to pay small amounts of money, ranging from to a few cents to a few dollars.

This model is known as “microstransactions.” Microtransactions in online games are not new. Casual gaming site Pogo has toyed with them for social networking features, but PlayFirst is one of the first companies to integrate them with a mainstream casual game. This move takes micropayments beyond massively multiplayer online role playing games, which are more complex games that feature hundreds or thousands of people playing in a large virtual world at the same time. Diner Dash: Homeland Hero is a simpler game, intended to play online with a small handful of people.

Using microtransactions, PlayFirst can rope in and extract revenue from the mass of casual gamers who balk at the $20 price point, and extract even more from those who are willing to buy the game. Also, unlike the paid downloadable “story” version of the game, which has a central character named Flo and a series of levels to win, the online experience, with its focus on multi-player, is open-ended, allowing PlayFirst to continually add content and keep the revenue flowing into its bank accounts and out of yours. 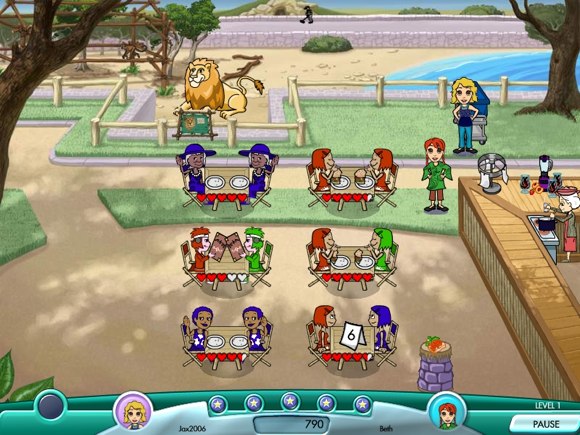