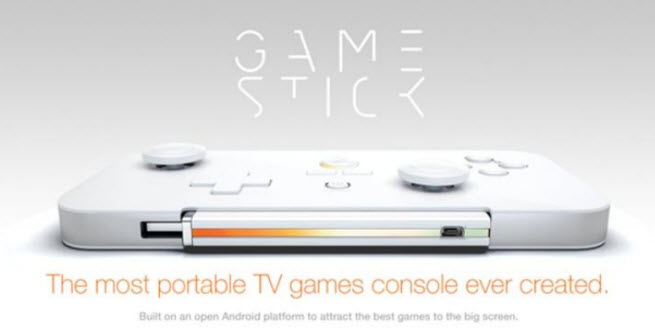 PlayJam is touting its GameStick as the “most portable TV games console ever created.” It is an Android video game console on a universal serial bus (USB) stick. And the company has launched a crowdfunding campaign to raise $100,000 via Kickstarter today.

After half a day, PlayJame has already raised $48,000, leaving it nearly halfway to its goal. The campaign runs for 30 more days.

San Francisco-based PlayJam is the latest company that wants to bring games designed for smartphones and tablets to the TV. You can already do this if you have a set-top box with Google TV. But PlayJam intends to couple its USB stick with a game controller that allows you to play touchscreen games with a traditional game controller.

GameStick plugs into a TV’s HDMI slot and comes with a Bluetooth-based game controller. You can snap the USB stick into the controller when you want to take it on the road. You could easily play this on a hotel room TV while traveling. PlayJam’s executives say they will sell the GameStick for $79. The project was born from the belief that game consoles and games are still too expensive and aren’t open enough when it comes to content options. As such, it is a rival to the Ouya game console scheduled for this spring.

The device runs the Jelly Bean version of the Android mobile operating system and uses Amlogic’s 8726-MX processor. That processor uses a dual-core cortex A9 central processing unit designed by ARM and it also has a dual-core Mali 400 graphics processing unit from ARM. PlayJam says the system can run the most demanding Android games now available. The device has Wi-Fi capability and 1GB of main memory and 4GB of NAND flash memory. It also has 8GB of micro-SD memory.

“To date, the most popular route to TV has been via traditional console manufacturers but the associated restrictions and cost make this unviable for the majority of game developers,” said PlayJam chief executive Jasper Smith in a statement. “We want to break down these barriers and open up the big screen to the thousands of developers looking to break into the living room. For the consumer, we want to bring a huge range of affordable games via a unique, highly portable device.”

PlayJam has its own publishing platform on Android for Smart TV games, and it has a network of 250 developers. It plans to tap those developers to make content for GameStick. The PlayJam network is integrated with Smart TVs from Samsung, LG, Panasonic, and Sony.

“GameStick is an important step in what we hope will be an industry-wide, collaborative approach to develop a new open ecosystem for TV games,” Smith said. “To further accelerate this, we offer our underlying platform, user interface, content and expertise to any hardware manufacturers wanting to enter this sector.”

The company has support from Charles Huang, cocreator of Guitar Hero and founder of Green Throttle Games, which is making its own Android-based game controller for TV games. Huang appears in PlayJam’s Kickstarter video voicing his support.

The GameStick is currently in a closed beta test with working prototypes.

“We hope to see games developers everywhere getting as excited about the GameStick and trends it represents as we are and getting behind us on this campaign,” Smith said.