PlayStation shows no sign of relinquishing its crown when it comes to TV budgets — Sony’s console brand accounted for over 43 percent of all industry spend in January. We also had some notable newcomers to the top five last month: Scopely, Square Enix, and Seriously Digital Entertainment made appearances.

GamesBeat has partnered with iSpot.tv, the real-time TV ad measurement company with attention and conversion analytics from more than eight million smart TVs, to bring you a monthly report on how gaming brands are spending. The results below are for the top five gaming industry brands in January, ranked by estimated national TV ad spend. 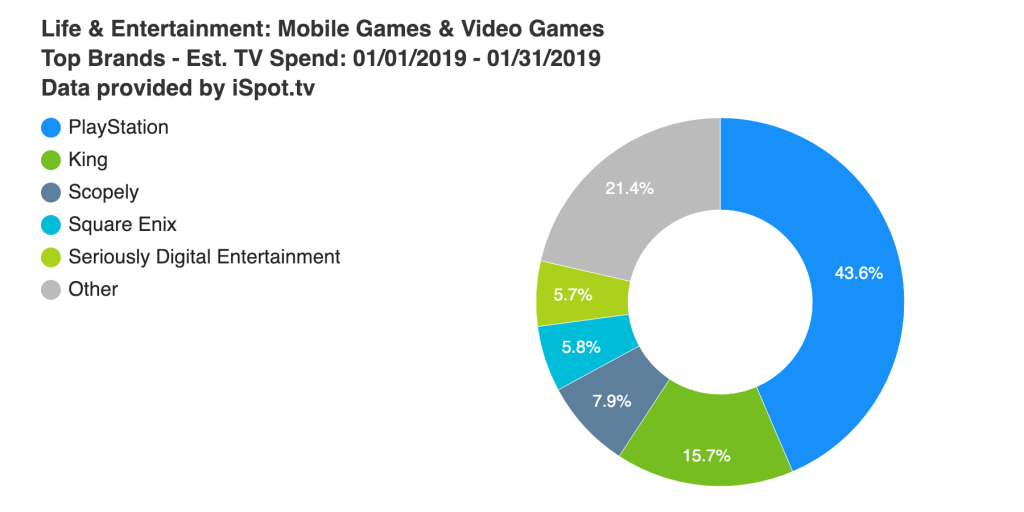 PlayStation led the pack with an estimated spend of $12.9 million for five ads that aired 958 times, generating 510.3 million TV ad impressions. With a budget of about $8.2 million, “Bazaar” was the spot with the biggest spend. As usual, company prioritized reaching a sports-loving audience, with big spend during programs including the NBA, the PlayStation Fiesta Bowl, and college basketball. Networks with high spend included ESPN, Fox, and TNT.

In (a fairly distant) second place was King, with an estimated spend of nearly $4.7 million on just Candy Crush two commercials that aired over 4,600 times, creating 730.2 million impressions. “Sweeter Than Ever” accounted for the majority of the budget (almost $4.2 million). ABC, MTV, and Hallmark were three of the networks with the highest spend, while top programs included The View, GMA Day, and Ridiculousness.

Chart newcomer Scopely took third place with about $2.3 million in spend for three ads that ran 727 times and generated 114.8 million TV ad impressions. The company prioritized much of the spend ($2.1 million) to “Star Trek: Fleet Command TV Spot, ‘Mobile Space Combat’.” Networks with the highest budgets included Comedy Central, Adult Swim, and TNT, while some of the programs with big spend were the NBA, South Park, and Wheel of Fortune.

At No. 4: Square Enix with an estimated spend of $1.7 million on two spots, both for Kingdom Hearts III, that aired 939 times and racked up 166.9 million impressions. “Together Trailer” had the biggest budget, an estimated $1.6 million. Cartoon Network, Nick, and Teen Nick were three of the networks with big spend, while top programs included Total Drama Island, SpongeBob SquarePants, and Family Guy.

With an estimated spend of $1.7 million, Seriously Digital Entertainment rounds out the ranking. The company ran four commercials over 3,600 times, creating 285.5 million TV ad impressions. The ad with the biggest spend, an estimated $798,000, was “Best Fiends: Collect Cute Characters.” Some of the networks Seriously Digital Entertainment prioritized were Pop, Comedy Central, and VH1, while South Park, House, and Ghost Whisperer were three of the programs with the most spend.