PlayStation again goes big, topping its rivals in TV ad spend once again after leading in October and September.

GamesBeat has partnered with iSpot.tv, the real-time TV ad measurement company with attention and conversion analytics from more than seven million smart TVs, to bring you a monthly report on how gaming brands are spending. The results below are for the top five gaming industry brands in November, ranked by estimated national TV ad spend. 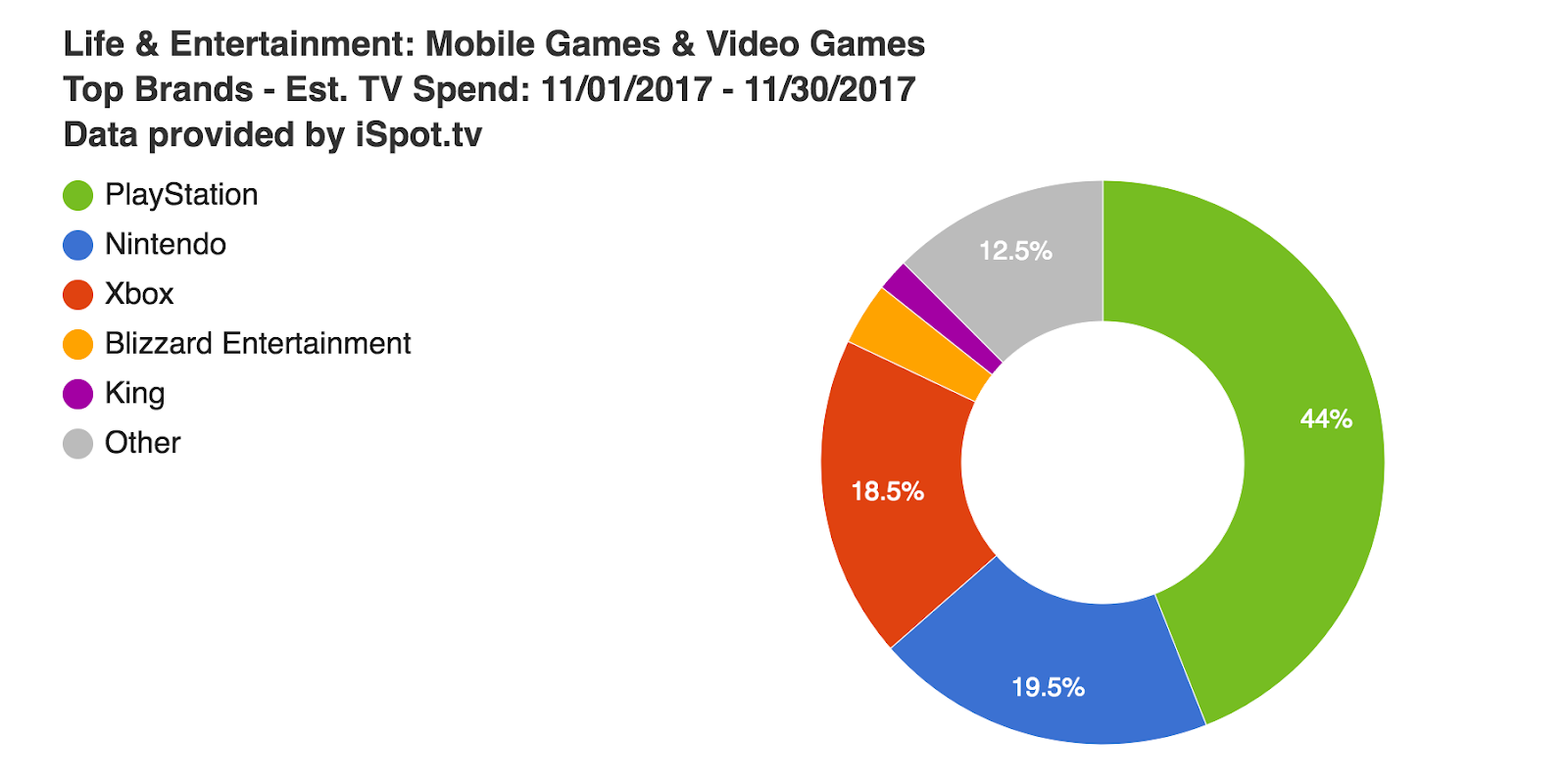 PlayStation snagged first place with an estimated $52.2 million spent on placing 16 spots that ran 5,200 times and racked up 1.9 billion TV ad impressions. The commercial with the biggest placement budget (est. $11.5 million) was “Star Wars Battlefront II: Heroes Are Born.” Overall, the brand put an emphasis on putting its ads in front of a sports-loving audience, spending during programming such as NFL football, college football, and NBA basketball, and across networks including ESPN, Fox, and NBC.

Nintendo more than doubled its spend from October to November, rising to $23.1 million. The brand ran 27 spots over 7,600 times and generated 1.4 billion impressions. The commercial with the biggest placement spend (est. $4 million) was “Get Together With Great Games,” which promoted the Switch. Nintendo prioritized ad placement on networks including Nick, Comedy Central, and Adult Swim, and during programming such as NFL football, SpongeBob SquarePants, and South Park.

In third place: Xbox with $21.9 million in estimated spend to place five ads that aired over 2,200 times, generating 841.2 million TV impressions. “Feel True Power,” featuring music from Kanye West, was the commercial with the biggest placement budget, an estimated $19.2 million. Among of the top networks for Xbox in November: NBC, Fox, and Comedy Central. Among the top programming: NFL football, The Walking Dead, and college football.

At No. 4: Blizzard Entertainment, which spent about $4.3 million placing four commercials that ran 59 times, resulting in 175.6 million impressions. The company focused on promoting Overwatch, with “Overwatch: Game of the Year Edition” having the biggest estimated TV spend ($2.3 million). Blizzard focused on reaching a sports-loving audience, with budget prioritized to programming including NFL football and college football, and networks such as NBC, Fox, and ESPN.

King takes fifth place with an estimated TV spend of $2.2 million for three spots that aired over 2,200 times and generated 393.5 million TV ad impressions. All three commercials were for Candy Crush, with “Powerful Booster” getting the biggest placement budget (est. $1.5 million). King prioritized networks including CBS, ABC, and TV Land, as well as shows such as Lucifer and Everybody Loves Raymond in syndication.