PlayStation has been spending big on marketing, and yet for October, it upped its TV advertising budget for October, spending an estimated $28 million. Meanwhile, Nintendo takes a distant second, and Ubisoft, King, and Riot Games round out the ranking.

GamesBeat has partnered with iSpot.tv, the real-time TV ad measurement company with attention and conversion analytics from more than eight million smart TVs, to bring you a monthly report on how gaming brands are spending. The results below are for the top five gaming industry brands in October, ranked by estimated national TV ad spend. 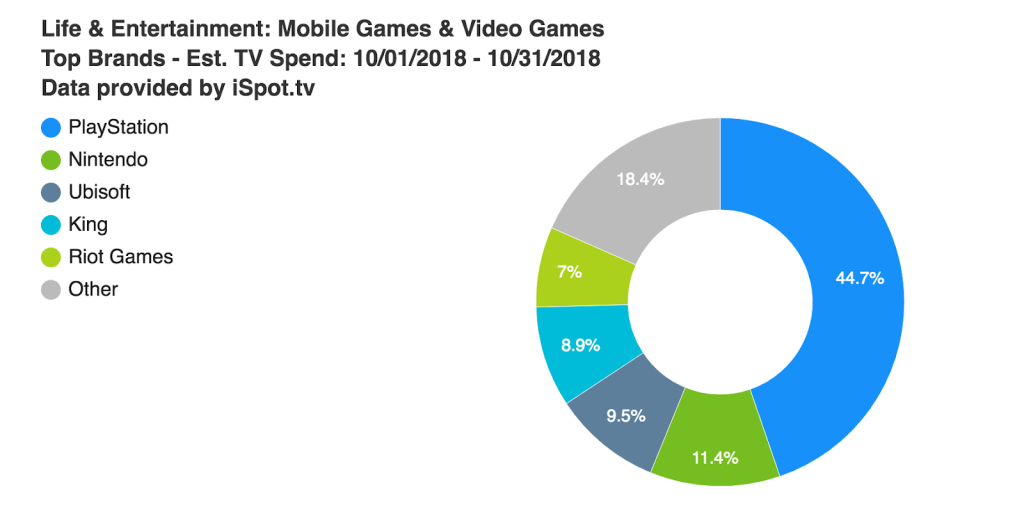 PlayStation’s estimated $28 million outlay, up from September’s $24.2 million, was devoted to 20 spots that ran over 2,600 times, resulting in 1.2 billion TV ad impressions. “Nothing Means More,” promoting Red Dead Redemption 2, was the commercial with the biggest spend — an estimated $8.7 million. PlayStation focused on reaching a sports-loving audience, emphasizing spend across networks including ESPN, Fox, and Adult Swim, and during programming such as the NFL, the NBA, and college football.

At No. 2 is Nintendo, with an estimated spend of $7.2 million on 17 ads that aired over 2,900 times and generated 517.3 million impressions. The ad with the biggest monetary push (est. $2 million) was “Super Mario Party,” promoting the Nintendo Switch game. As usual, the company prioritized spend to reach a family-friendly audience, with sizeable budgets across networks such as Nick, Teen Nick and Adult Swim, and during shows including SpongeBob SquarePants, The Loud House, and The Amazing World of Gumball.

With an estimated spend of $6 million, third place goes to Ubisoft. The company aired four commercials 721 times, resulting in 229.5 million impressions. The Assassin’s Creed Odyssey spot “Gods Have Spoken” had the biggest budget, an estimated $3.8 million. ESPN, Fox, and Comedy Central were three of the networks with high spend, while NFL, the NBA, and college football and were some of the programs for which Ubisoft prioritized budget.

King grabs fourth place with an estimated TV ad spend of $5.5 million on just two commercials, both for Candy Crush, with “Sweeter Than Ever” accounting for nearly its entire budget. Combined, King’s two spots aired over 2,100 times and generated 430.8 million impressions. Three of the networks that King spent heavily across were ABC, NBC, and CBS, while top shows included NCIS, The Voice, and Empire.