Sony’s PlayStation 4 is back on the top, as EA Sports and Xbox muscle in while Nintendo drops.

As kids went back to school, Nintendo decreased its spend in September to roughly $4.45 million, down from an estimated $6.2 million in August, and PlayStation overtook the top spot on the charts, adding an additional eights spots to the one it aired in August promoting “Marvel’s Spider-Man.” Xbox broke into the top five, claiming second largest spend with nearly $8.2 million on a big push for “Shadow of the Tomb Raider.” Ubisoft and EA Sports overtook the fourth and fifth spots with EA only airing one spot promoting “Madden NFL 19: Make Your Play.” 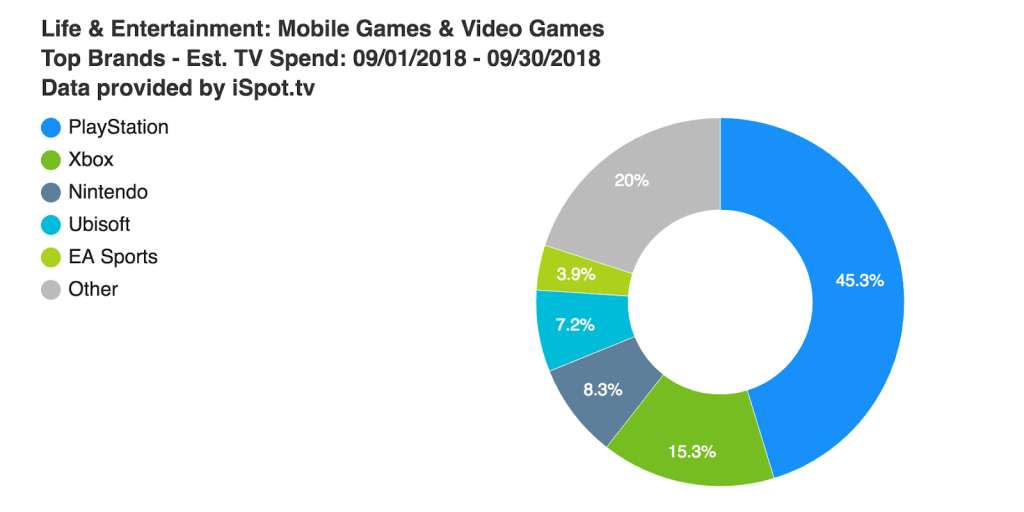 GamesBeat has partnered with iSpot.tv, the real-time TV ad measurement company with attention and conversion analytics from more than eight million smart TVs, to bring you a monthly report on how gaming brands are spending. The results below are for the top five gaming industry brands in September, ranked by estimated national TV ad spend.

PlayStation overtook Nintendo’s lead with an estimated spend of $24.2 million on 9 commercials that aired over 2,900 times, resulting in 1.1 billion impressions. The ad with the biggest budgetary push — an estimated $9.2 million — was Marvel’s Spider-Man TV Commercial, “Be Greater” featuring Francis Magee. The brand switched things up on networks and programs, going big on sports and spending heavily on ESPN, NBC, and Fox, and during specific shows including the NFL, college football, and South Park.

Xbox reemerged in the top five for September, spending about $8.2 million placing four ads that generated 569.5 million impressions from 3,000 airings. It focused spending efforts on ads promoting ‘Shadow of the “Tomb Raider” and “NBA 2K19” featuring Lebron James with the largest spend (est. $3.9 million) going to Tomb Raider ad, “Become the Tomb Raider.” The company prioritized spend on networks including Fox, MTV, and ESPN and during programming such as the NFL, college football, and South Park.

With an estimated budget of $4.4 million, Nintendo fell from the top spot in August to third place. Its 10 spots had over 2,700 airings, which resulted in 335.4 million TV ad impressions. The ad with the largest spend ($1.6 million) was the Nintendo Labo Vehicle Kit commercial “Make, Play and Discover.” Nick, Teen Nick, and Nick Toons were some of the networks it prioritized, while programs with high budgets included SpongeBob SquarePants, The Loud House, and Nicky, Ricky, Dicky & Dawn.

At No. 4: Ubisoft, with an estimated spend of $3.8 million on three ads promoting “Assassin’s Creed Odyssey” which aired over 320 times and generated 135.5 million impressions. The majority of spending, about $2.3 million, went to the Assassin’s “Gameplay” spot. Ubisoft prioritized spend to reach a pop culture-loving audience: top networks included Fox, Comedy Central, and MTV, while some of the shows with the biggest budgets were the NFL, South Park, and Ridiculousness.

Closing out the chart is EA Sports with an estimated spend of $2.1 million on one commercial for “Madden NFL 19,” “Make Your Play” which featured Nicki Minaj, Quavo and Chris Redd, and ran 26 times and generated 105.6 million impressions. EA only spent across three networks: ESPN, NFL Network, and ESPN2, and the top programs included the NFL, First Take, and SportsCenter with Scott Van Pelt.