Plextronics, a unique company developing organic solar cells and light emitting-diode displays — including television screens so flexible you can bend them — announced today that it’s brought in $14 million in second-round funding. The Pittsburgh company says it will use the money to continue research and spearhead manufacturing operations that will hopefully reach commercial scale. 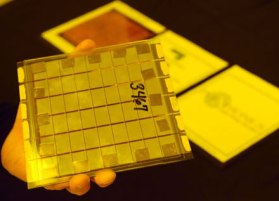 Organic light emitting-diodes (OLED) include an extremely thin layer of organic compounds that are literally printed onto their surfaces. Because OLED screens are not backlit, they tend to be a little less bright than their inorganic LED cousins. They are also less efficient, converting only 25 percent of the energy they receive into light. Their major advantage is that they are much cheaper, but they also offer greater flexibility, a wider range of colors and arguably sharper images. Because they are so bendable, and even printable on surfaces in some cases, they have a broad field of applications.

Perhaps more interesting than Plextronics’ OLED business is its entry into the photovoltaic space. It currently offers an organic photovoltaic ink that replaces silicon and could significantly reduce the cost of portable solar systems. It produces energy from sunlight using very thin and lightweight layers of organic polymers that can be printed directly onto surfaces. With silicon prices dropping and a surplus of solar equipment on the market, this segment of the business might not take off quite yet. Companies like Plextronics will need to offer competitive prices and successfully market the high efficiency of printed solar cells to have a chance in today’s market. Here’s a look at how its solar ink works: 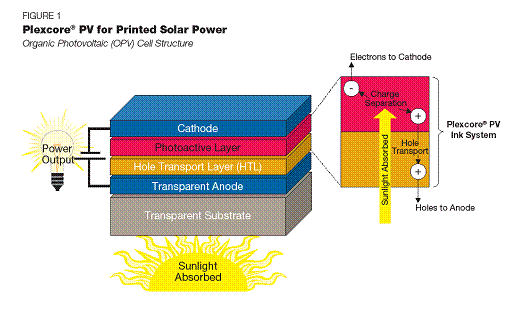 In January, Plextronics started using a $6 million pilot assembly line for its OLED displays and solar equipment. About $12 million of the recent round of funding came from Solvay Group, based in Belgium. The company, which specializes in pharmaceuticals, invested in Plextronics’ $25 million first-round of financing in 2007 as well. Other backers include Firelake Capital Management, Innovation Works, Applied Ventures, Birchmere Ventures, Draper Triangle Ventures and Newlin Investment Company.