Core games are faring better on mobile these days, and that’s the trend that Pocket Gems is seizing upon with the unveiling of Wild Beyond, a mobile game that blends real-time strategy and collectible card games.

The free-to-play, sci-fi title debuts on iOS on November 22, and it is the first game from Pocket Gems‘ new San Francisco studio, Strange Sevens Studio. It’s the latest game that, after the successful launch of War Dragons in 2015, embraces hardcore gaming on mobile. This strategy, as well as its successful Episode storytelling app, helped Pocket Gems raise $90 million from Tencent in 2017.

Inspired by games like StarCraft on the PC, Wild Beyond has two-player multiplayer combat, where players select in real time which combat units to send down two separate lanes to attack the enemy’s base. I played a preview of it, and the battles are short and intense, lasting just a few minutes. It’s a stripped-down version of RTS games on the PC, but it captures the essence of play well.

“StarCraft is one of my favorite games, and it inspired a lot of Wild Beyond,” said Brian Shih, director of product management at Pocket Gems and leader of the team building Wild Beyond, in an interview with GamesBeat.  “We had to think about what makes RTS games great, but still appropriate for mobile.” 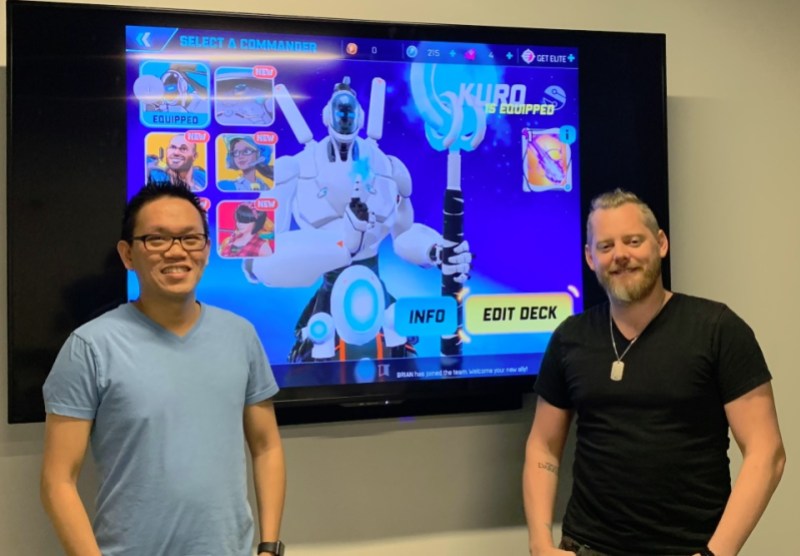 Above: Brian Shih and Jon “Swede” Selin show off Wild Beyond at Pocket Gems.

You could say it resembles Supercell’s Clash Royale, except it’s a sci-fi title with horizontal combat, rather than a vertical layout. But it’s an original title that has only become possible as mobile graphics and connectivity have gotten better.

The player selects one of three factions: Rogue, which consists of apocalypse survivors and chaotic misfits; Legion, whose followers obey orders and work together; and the Ascension, a group of advanced robots who use careful defense at all times.

You can think of the Rogue as the blow-torch wielding Road Warriors; the Legion are like the Terrans in StarCraft, with hulking mechs, sniper drones, and lots of infantry. The Ascension have state-of-the-art robot-ninjas with latent magical abilities.

Then you select a commander and the kind of troops you’ll deploy. As the game starts, you select which units to attack with, using command points to dispatch units as the points are generated in real time. The troops start marching toward the enemy, who can counter them with appropriate defensive units or just launch a counteroffensive. When you set them loose on the map, you no longer control them.

“We knew we had to design it for mobile, and make the play sessions shorter,” Shih said. “We wanted to create the fantasy of managing a large army, where the skirmishes build up into an epic battle.”

Each side as shields, defensive units, offensive units, and a fortress to defend. You can unlock new units over time and change your collectible card deck. You have to battle on different planets and fight armies from different factions. The multiplayer is either one-versus-one or two-versus-two.

A single-player tutorial and an extensive story campaign help you learn how to play the game. As you learn, you can fight real humans and rank up on the competitive leaderboard to earn prestige and rewards. The game has six commanders and more than 70 units from three factions. You can join alliances and trade cards with your teammates. As many as 60 players can be in an alliance. 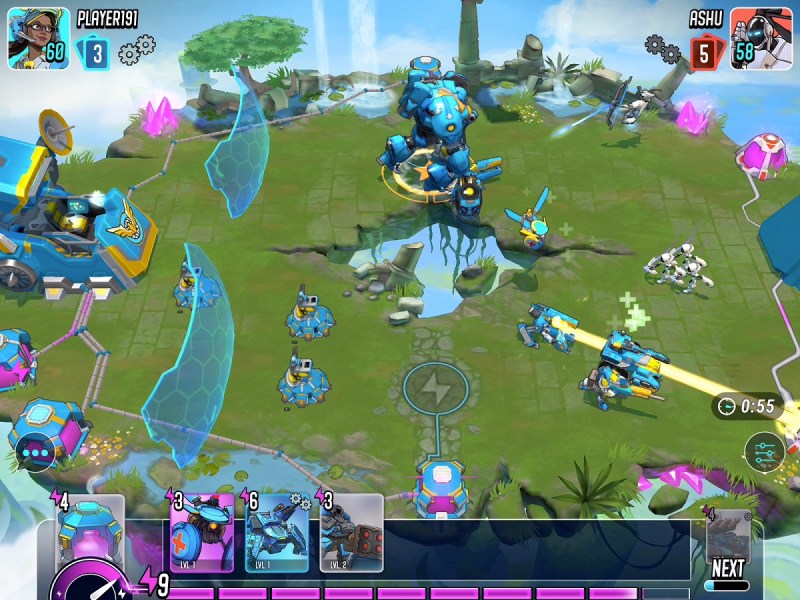 Above: More than 70 people worked on Wild Beyond at Pocket Gems.

You can use strategies that are similar to those in PC RTS games, like the “early rush” or a long game where you spend time building up forces and infrastructure. You can design your deck to suit either kind of strategy.

The company decided to greenlight the game and start the Strange Sevens Studio to create experiences that hardcore gamers would love on mobile, said Jon “Swede” Selin, vice president of game design at Pocket Gems, in an interview with GamesBeat.

Selin said the game is not a “pay to win” game, a kind of free-to-play game where you can spend real money to give yourself an overwhelming advantage. These kinds of games are increasingly getting panned by Western gamers.

“I can tech up and build for the long game,” Shih said. “The decisions you make can make a real difference in the game. Swede is doing an early rush on me, while I’m talking.” 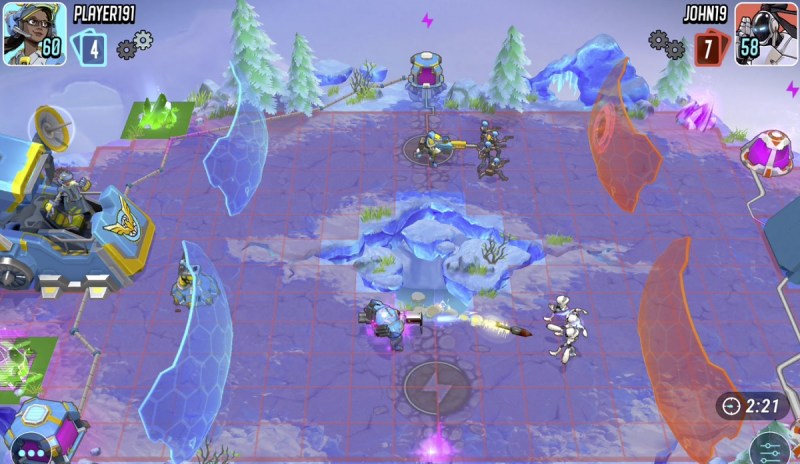 Above: Wild Beyond matches last around three minutes.

The game is different in that it builds to a kind of crescendo, where one side overwhelms the other.

You can also enlist heroes, like Kuro, who puts a decoy out and buys time as the enemy wastes their firepower trying to kill the decoy. Each faction has two commanders.

You can get rewards from player-versus-player and pay subscription fees to remove timers. The fees are $2 for seven days, $5 per month, or $40 for a full year. The game will release later on select Android devices.

Above: Wild Beyond has a lot of different units that you can earn over time.

Shih said scores of people worked on the game at Pocket Gems. Shih said he has been working on the game for a long time, roughly four years. Pocket Gems recruited a lot of hardcore game veterans to make the title.

“We started working on it before Clash Royale came out,” he said. “Like with War Dragons, we’ve been very focused on high quality.”

“There are a lot of people trying to do Triple-A quality on mobile, but we have our focus doing mobile first,” Shih said. “With three-minute sessions, it fits into a mobile gamer’s lifestyle.”