If you’ve ever been to Nashua, New Hampshire, you have surely been down Main Street. Main Street is like any other main strip in most small towns in New England. It is full of small shops, boutiques, restaurants, and monuments — with those being the most important. Due to the fairly new mobile game Pokémon Go, which places most of their Gyms and PokéStops at monuments and landmarks, Nashua has become a hotbed for mobile trainers, and it’s because of this that the opportunity for small business owners has never been higher.

The difference two weeks can make

Just two weeks ago, the only time Nashua had a lively downtown was Friday and Saturday nights, when the bars closed and people hit the streets. Now, several hundreds, maybe thousands, of people are scattered around the monuments and local businesses at all times of day trying to “catch ’em all” in an augmented reality that has made a difference to local business owners.

While players stay glued to their phones, and social media channels battle about whether the game is “cool,” PokéFever has been a huge plus for local store owners. Portland Pie Company, a small Portland, Maine-based pizza chain with two locations in New Hampshire, has placed a chalkboard outside their store to go along with the phenomenon that advertises their “Pokémon Go Special.” This special offers trainers a bottled drink, a slice of pizza, and (of course) unlimited Pie-fi (Wi-Fi). Portland Pie sits across from Deschenes Oval, where players gather each day due to the amount of Lures dropped there as well as the park being a well-known PokéStop. Scott Hartford, the location’s manager, says that he has seen foot traffic more than quadruple since the game’s release and while the “Pokémon Go Special” itself has only been purchased a few handfuls of times, there is a nice uptick in business thanks to the game’s popularity in the area. 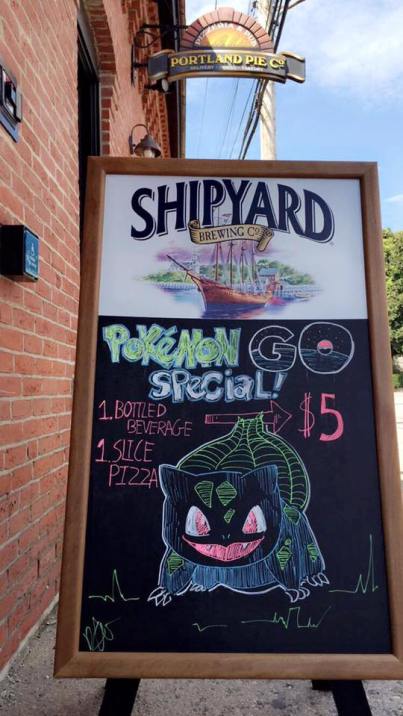 Portland Pie isn’t the only pizza place gaining business thanks to this game. Soprano’s Pizza, which is across the street from the oval in the other direction, is also getting an increase in business. The North part of Main St. that borders Concord St. and Amherst St. rarely received an immense amount of foot traffic until recently. Owner Bill Parrish says that he has seen a huge difference in the amount of dinner and lunch business he gets specifically on the weekends and believes the increased foot traffic due to the game’s popularity is to thank.

Coffee shops and even bars in the area are tapping into this phenomenon, offering free Wi-Fi and charging capabilities to players and they too have certainly seen their fair share of increased foot traffic thanks to immense amount of PokéStops and Gyms in the area.

Regardless of your feeling toward this game, if you are a small business owner, you need to consider Go’s potential. This game is cool and can be a huge win for you if you do it right. Not sure how? Keep reading.

Pokémon Go has, in many cases, reintroduced a group of spenders into your local economies. The stereotype of a “gamer” is one that is not often disputed by. The stereotype is one that is known to spend the majority of their time in their homes playing video games, and when they’re not in their homes, are out working and making money. A recent Reddit discussion shows that many adult gamers choose to play video games rather than spend it out and about. Pokémon Go has given gamers a way to spend their time out of work and has given small businesses exactly what they need.

Do you want to get these customers in your door? Of course you do. First things first. If you don’t have free Wi-Fi or a high-speed internet connection at your business, get it. Also, invest in a device-charging station. This could be as simple as a power strip near tables or a charging kiosk to give people a refreshed battery. After you equip your business with these; advertise it. Something as simple as a Facebook post and a sign outside of your store. For those walking around catching Pokémon, a sign saying “Free Wi-Fi and charging” is just about the best thing they could stumble across when playing a game that not only drains your battery but your data, too.

Once you get these trainers through your doors, your focus should be keeping them there and getting them to come back. Tell them to like you on Facebook and follow you on Twitter — and of course creating promotions that will have them telling their friends — are all musts. Once you feel you have a decent customer base of Pokémon players, launch the Pokémon Go app (yes, you should definitely download and play this game) and buy a bunch of lures. Create a night or day where your business will be dropping these lures and advertise it on social media and on your storefront. Once this night rolls around, be prepared to lure some Pokémon and some business as well. A little unsure on the ROI of this simple investment? Thankfully, TechnoBuffalo broke it down.

Take advantage of this opportunity

If your business is near a PokéStop or Gym, you can be sure to find a lot of foot traffic naturally in your area, but even if you aren’t close enough to these stops, you can still give these players exactly what they need. This game could be a gold mine for small business owners in a small, concentrated area if you play your cards right. It’s given a large group of individuals a reason to walk the streets in large groups that all have the same goal in mind. While this is yet another opportunity to use technology to help bring in business, it is also an opportunity to make a name for yourselves the old fashioned way; word of mouth. These players will be walking around, hungry, thirsty, tired and ready to spend money.

Small business owners, this game is for you — get onboard, because who knows how long this trend will keep up.

Keegan Green is a Florida-based writer who loves blogging about sports and technology and whenever possible, a mix of the two.