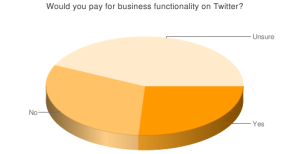 Twitter’s we’ll-figure-it-out business model may end up as a paid offering for businesses.

A poll of 850 Twitter business users by WebBizIdeas.com found that while three-quarters of them didn’t express interest in paying for Twitter add-on features such as analytics, 26 percent said yes, they would pay for the right services. WebBizIdeas defined business Twitter users as those having an account whose primary purpose is the sale and/or promotion of a product or service. Promoting yourself doesn’t count.

Of those who said yes, 8 percent — that’s 2 percent of business Twitter users — would pay $100 per month or more. While that sounds low, many Web businesses successfuly offer basic functionality for free while charging a minority for premium services, in a business model often called “freemium.”

The survey also asked, “Which advertising options would provide the most value to you?” Twenty-one percent said they would most want ads that increase their number of Twitter followers. Sixty-eight percent said they’d rather have standard display ads with cost-per-click, cost per action, or cost per impression pricing.

One stat WebBizIdeas couldn’t provide this time around: What fraction of Twitter users, or how many people, qualify as active business users? That’s what anyone looking for a way to monetize business users’ needs would want to know.