Of Americans who know enough about net neutrality to have an opinion, a slim majority support the regulation.

However, most don’t know enough to offer an opinion (57 percent). But knowledgeable respondents favor net neutrality, 23 percent to 19 percent (or, counting only those who have an opinion, 55 percent to 45 percent).

This data comes from a survey of 714 U.S. adults I conducted, using Google Consumer Surveys, a polling tool from the search engine giant. 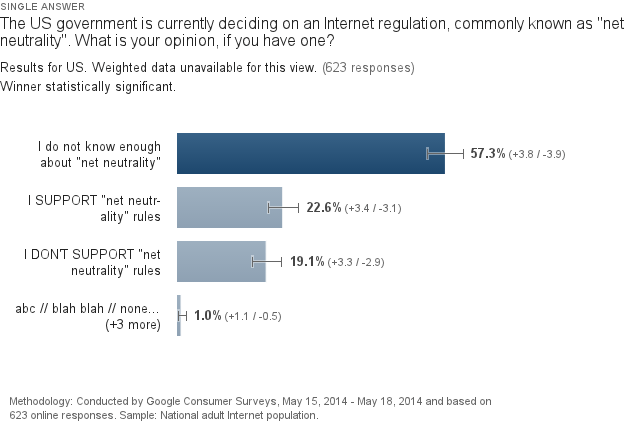 Though the issue of whether telecom companies can charge for Internet “fast lanes” is of supreme importance to the tech industry, regulations like this usually don’t merit the resources of a national survey. But, the super-wonky tech regulation has made its way to front page headlines thanks to a high-profile battle between Internet giants (like Google) and telecommunication providers (like Comcast). The Republicans’ most powerful members in Congress threatened Federal Communication Commission Chairman Tom Wheeler last week, making net neutrality an ever increasing policy of public interest.

So, it’s not only an issue for the tech industry. Net neutrality is now popular enough for public opinion to mean something — even if most people still have yet to wake up to the issue.

Before I get into the details of the results, let’s walk through this survey. Asking about net neutrality isn’t like asking about immigration reform: Most citizens have never heard of the regulation. And, when faced with an unknown issue, American respondents will give some kind of opinion — even if the policy is a complete fabrication.

A poll in 2006 found that 20 percent of Americans supported net neutrality, despite the fact that only 7 percent had heard anything about it. This means that if we poll the issue, we’ll likely get a knee-jerk reaction against regulation — whether respondents know anything or not.

So, for my poll, I gave respondents an easy out: Offer an opinion, or say you don’t know anything. Most (57 percent) happily admitted they did “not know enough.”

Democrats favor net neutrality nearly 2-1 (31 percent in favor of net neutrality vs. 17.5 percent against). Most importantly, nearly half know enough to offer an opinion. Because more Democrats offered an opinion, a narrow slice of the total population supports it. 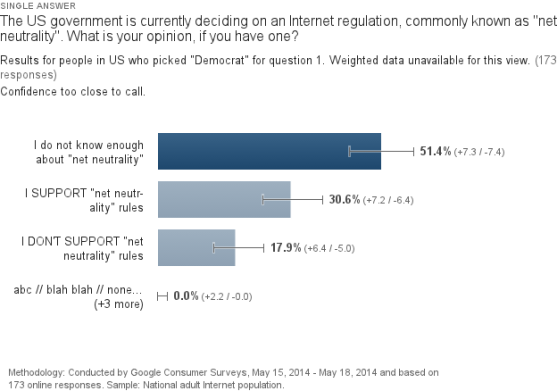 Like conservative leaders in the House of Representatives, self-identified Republicans tend to oppose the FCC’s regulation of the Internet (22 percent oppose it vs. 14 percent supporting), but the difference was within the survey’s margin of error, so it’s hard to draw a solid conclusion from this.

Interestingly enough, males were far more likely to both support net neutrality and offer an opinion (30 percent support, 54 percent have an opinion). Females are split on the issue and overwhelmingly didn’t feel they knew enough (only 30 percent had an opinion). This could be because tech is a male-dominated industry, or because males, on average, are just more confident than women about everything. 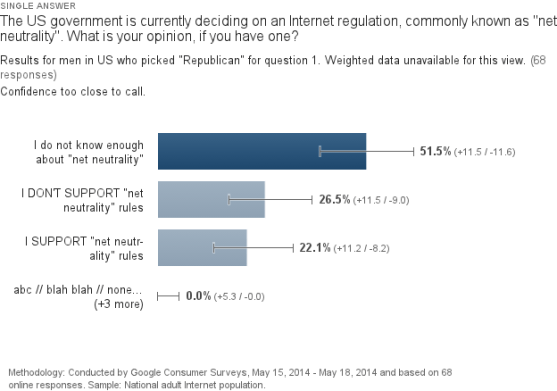 The President, however, is supposed to represent the country more broadly. So, maybe he’ll have more confidence to put pressure on his FCC chairman to uphold his promise of protecting net neutrality.

One note about Google Consumer Surveys: Polls created with this tool perform a systematic random sampling of Americans. In 2012, then-New York Times election forecaster Nate Silver found that Google Surveys out-performed most other polls. In the past, I’ve replicated the results of Pew opinion surveys using the tool, lending credence to Silver’s claim. Feel free to check out the net neutrality survey and download the data.