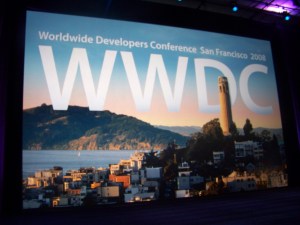 The Apple Worldwide Developer Conference is under way now, though the press is no longer allowed there. The reality distortion field is off now. Shields are back up, as analyst Nathan Brookwood at Insight64 said. I had a lot of fun sitting in the keynote and blogging with MG Siegler, including chatting with readers in a FriendFeed room that MG set up. I wasn’t even planning on doing that, but MG was drawing such a crowd that he added me in the middle of the keynote so I could post there too. Now that I can step back a little, I find it interesting how Steve Jobs had us all drinking from the narrowest of straws and loving it.

I can’t believe, for instance, that the crowd was cheering when Jobs showed how the iPhone 3G could load a web page in 21 seconds. If 3G is that slow, I’m not sure how exciting it could be compared to getting near-instantaneous page-loading on a Wi-Fi laptop. I sure hope that AT&T improves the speed of the network so that the page-loading is a lot faster.

Jobs only talked about the iPhone and its apps today. There are so many unanswered questions about the iPhone itself, as MG said. But there are a lot of other questions about Apple that I’d like to see answered as well. This afternoon, Apple detailed the new changes to the Mac OS X operating system to developers, but not the press. The so-called Snow Leopard version of the OS isn’t as big a deal, but Apple followers will appreciate the details.

It would have been nice to get an update from Apple on its other products too, such as Apple TV, the iMacs, the MacBooks, the MacBook Air, iTunes, and the iPod line-up. But, then again, Apple’s quarter closes on June 30 and it will have updates on its next earnings call.

I suspect we’ll all be called back to Cupertino in August or early September to write about Apple’s back-to-school line-up. If Apple announced its new computers for the fall now, it would have the Mac fans salivating and holding back on purchases. I would wager that Apple will have new MacBooks that use Intel’s Centrino 2 chip set, which comes with 802.11n and WiMax connectivity. Intel was supposed to announce it at Computex last week, but it held back due to some kind of technical glitch. If Intel can ship by mid-August, it will catch the back-to-school purchasing.

Macolytes are going to have to be patient. Like MG, I was waiting for the “One More Thing” surprise announcement. I was also looking around for the product viewing area after the speech. There wasn’t one, presumably because the iPhone 3G won’t be ready until July 11.

I’m also disappointed there was no mention of the force-feedback for the keypad on the iPhone. Right now, tapping on the iPhone keys is a hit-or-miss experience. The feedback, where you would feel a little bounce back when you hit a key, would have been welcome. Immersion has licensed its technology for use on a bunch of phones. But alas, there was no announcement. On top of that, Apple didn’t revise the keyboard so that it could be easier to type.

It’s cool that you can now look at Office documents on the iPhone, viewing spreadsheets or Powerpoint documents. But you can’t edit them with the iPhone’s virtual keyboard and look at them at the same time. It would be nice if you could project the screen from the iPhone onto a screen so you could edit a document.

Forgive me for being so critical, as the Jobs effect has worn off. Apple’s big announcements have a way of bringing out the inner product designer in all of us. Lastly, I would have been happy if there were more carriers named to carry the iPhone in the U.S. I’ve got nothing against AT&T; it’s just that I’ve been stuck on Verizon for years.