On-demand delivery startup Postmates is gearing up to launch a new system for brick-and-mortar merchants, enabling them to control their inventory and sell their wares online, VentureBeat has learned.

Postmates may unveil a portion of this platform for business owners tomorrow at a press event in San Francisco. The company announced the media event to reporters yesterday, vaguely saying: “We’re announcing the next step of the business. We’ll be introducing partners and talking about how Postmates can be used by merchants…”

Partnerships will be key for Postmates’ business going forward, as the company races against both fellow startups Instacart and Wunwun and tech giants Google and Amazon to dominate the next phase of local commerce. An official API will apparently power these partnerships, according to TechCrunch.

Postmates is preparing to announce at least one high-profile partnership tomorrow, VentureBeat has learned. Among potential partners, Postmates has held discussions with Apple to power same-day deliveries for the company, one VentureBeat source claims. Postmates and Apple both declined to confirm or deny such a partnership.

Although we could not independently confirm the deal, Postmates appears to have grown closer with Apple recently; Postmates hired Apple’s global business operations lead Francis Ebong in October and the company was among the first to adopt Apple Pay.

Ahead of Postmates’ announcement, select, non-functioning merchant pages are already live on its site, including Target, Walgreens, Chipotle, and Apple.

These pages offer a preview of the company’s upcoming web ordering feature. This feature is currently in development, we’re told, but is not scheduled to launch this week. 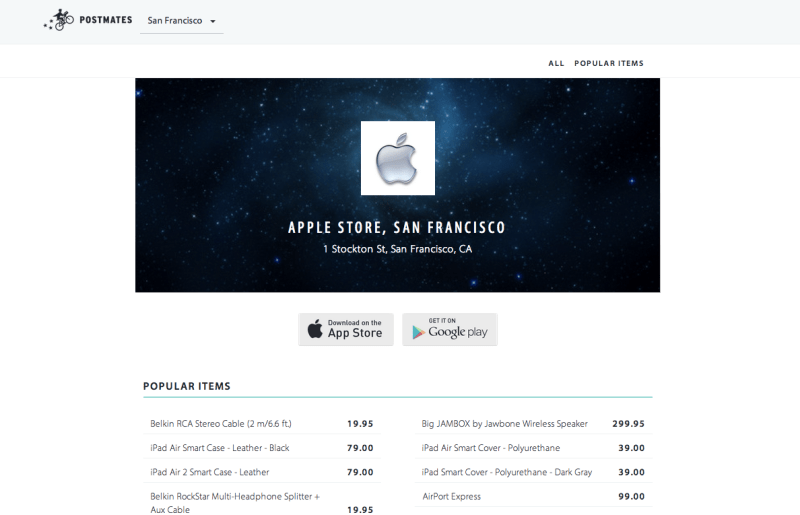 Postmates’ current business is only available to customers via a mobile app, and often works entirely indepentent of merchants. By introducing Web ordering, Postmates places itself more firmly in competition with companies like Seamless and increases the exposure (that is, potential sales) it can offer partner businesses.

Postmates’ hiring of former Foursquare business development head Holger Luedorf will play a key role in the company’s ambitions going forward. Just as Foursquare aimed to convince local businesses to take over their pages, the startup appears eager to hand over the legwork of managing business pages to merchants. Whether this plan will succeed, however, remains to be seen.

A public help page offers further hints at how the company plans to allow merchants to control their inventory:

As we grow, we will build a system that allows business owners to fully control their inventory. If you own a business and have any questions, or if you would like to promote, update or change the status of your store or restaurant in the app, please contact us at local@postmates.com.

For Postmates, the benefits of forging deeper partnerships are obvious; they’ll help the company secure its place in the same-day delivery game, despite its comparatively small size. And for brick-and-mortar merchants, Postmates offers them control over the same-day delivery experience as giants like Amazon and Google move in.