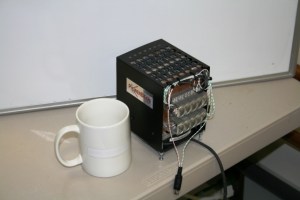 Transferring electricity through the air to power an electronic gadget seems impossible. Nikola Tesla, the radio pioneer, tried unsuccessfully to do it in the early 1900s. Technical hurdles have plagued the attempts to do the same thing ever since.

But PowerBeam, a small Sunnyvale, Calif.-based company that I first came across in April, 2007, says it is making progress on a technology that can transfer electricity — or more accurately generate electricity — across a room. It does so by focusing a laser on a solar cell, which converts the energy into electricity.

Grier Graham, vice president of product development, said the company can use a laser to generate about 1.5 watts of power to a solar cell as far away as 10 meters. That’s enough to power an electronic speaker or small low-wattage light-emitting diode (LED) lights. It can also charge the battery in a digital picture frame. But it’s not enough to operate a laptop (which requires maybe 30 watts to 50 watts).

But down the road, this product and others like it could create an enormous market for wireless devices that need power but are handicapped if they are tethered to a cord. These are devices that can’t get enough energy from direct sunlight to power them. 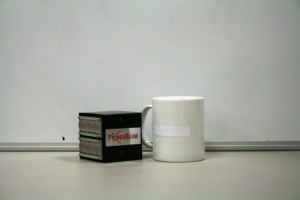 The current prototype’s receiver (left) is smaller than a fist and its transmitter (pictured at top) is about the size of half a brick. That’s a lot smaller than the original prototype I saw. The company still says it is about 18 months from having the products in the market. These folks have a long way to go, but they are making progress.

Graham, the brother of co-founder David Graham, says that the company needs to raise money to create a low-cost, fully customized version of the product. PowerBeam needs about $5 million to $6 million to do that.

The company raised $600,000 in a seed round from European venture capitalist I2BF. The company is one of perhaps a handful  that will show some kind of wireless electricity technology at the Consumer Electronics Show in January. Competitors include Witricity and Powercast. But both of those aren’t transmitting electricity as far as PowerBeam is trying to do. Other competitors are focusing on transferring electricity a very short distance from a charging pad to a cell phone. The idea is to use inductive coupling (or other methods) to charge multiple cell phones on one charging pad. The companies in this market include Powermat, eCoupled, WiPower and WildCharge.

PowerBeam was started a couple of years ago by co-founders David Graham and Xiaobing Luo. They point a laser at a solar cell, which takes the light and converts it into electricity. The problem with using a powerful laser to do this is you could slice somebody in half. So the company uses lasers that are powerful enough to do the job, but are safe. For instance, a safety system cuts the laser power if something interrupts the beam.

In future versions, Grier Graham thinks people can use this technology to power laptops without power cords. They could, for instance, sit at a cafe or a hotel ballroom and draw power from a light fixture above the room. The laser can seek out a solar receptor and concentrate its energy on that spot when it finds one.

You could also use it to power a security camera that doesn’t get enough light from a solar cell alone. In the near term, the company is focusing on getting a small amount of electricity across a room to power the digital picture frames, speakers, and lights. The company has four full-time employees and three contractors.